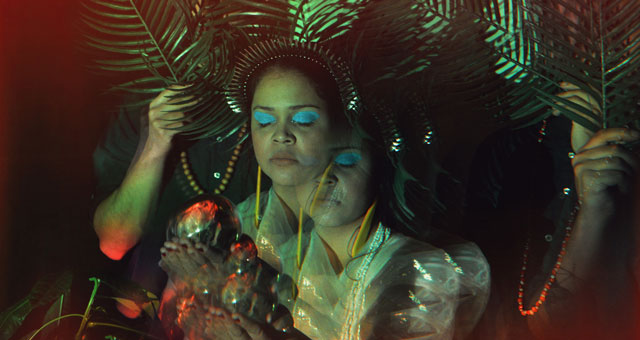 New York City’s Combo Chimbita have a new single out on ANTI-, which just signed the tropical futurists to their label.

The passion-filled single “Testigo” runs for nearly five minutes and is a fun one to see them perform live.

After playing together for years, these first-generation New Yorkers with Colombian roots—including powerhouse vocalist Carolina Oliveros, synth and bassist Prince of Queens, guitarist Niño Lento, and drummer Dilemastronauta—began experimenting with different traditional musical styles during their late night residencies at Barbès in Brooklyn. Exploring the connections between visual identity and improvisational long-form trips, Combo Chimbita came together as a four-piece band after they started encouraging more vocals by Oliveros, who tightens the rhythm with her guacharaca.

“ANTI- is a special label. It is crazy to be part of such a diverse pool of artists, feels extra special being an immigrant band singing in Spanish,” Prince of Queens said of signing to the Los Angeles based record label. “I grew up in Bogota listening to a lot of bands on Epitaph and not understanding a word they were singing but it made me want to be in a band and learn music. It feels like full circle working with [Epitaph’s sister label] ANTI-.”

Before 2018 ends, Combo Chimbita will be performing at Philadelphia’s PhilaMOCA before embarking on four shows with indie rock eccentrics Parquet Courts.

The band will also open 2019 with a bang as they’ll play globalFest, the powerhouse world music festival that brings a chock full of wonderful acts to New York City in January. This year, the concert will take place at the legendary Copacabana night club, now located near Times Square.

At A New Locale For Its 15th Year, Globalfest Enthralls Music Lovers