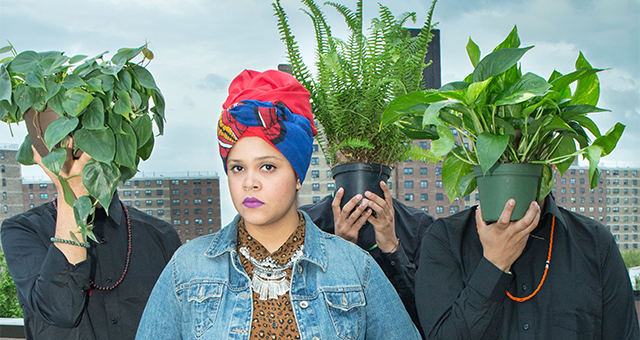 A new video by Combo Chimbita, a quartet whose explosive brand of “tropical futurism” has been lighting up venues in the New York City area for the past year, is a psychedelic visual story of their debut album, Abya Yala.

Taking place in Santa Cruz del Islote, a tiny Colombian island which is said to be the most densely populated one on earth, the video for the single “No Regreso” tells the story of a fisherman and his son in the ghetto of Abya Yala, a Kuna word meaning ‘land in full maturity’ before the colonial powers re-named the region Latin America. As the fisherman goes off to work for the day, the boy finds a mask that gives him the sacred power of the jaguar. Wearing the mask, he sees unsettling visions of the land and the impending threats to it, urging the boy to leave the island and further unlock the jaguar’s secrets.

Director Hugo Rubiano (Oro Pictures) explained that there was quite a trek involved in order to shoot the video on Santa Cruz del Islote.

“We started looking for routes and it was crazy: one flight, two busses, a boat for an hour and a half, and another boat,” he said.

Although they only had three days to scout the locations, find actors, and shoot the video, Rubiano said he and his two-person production crew caught a glimpse of how the island’s “civilization depends on no one, being in the middle of the ocean—like they fish and that’s it. They live off 30-minute tourism. There’s no police, there’s no hospital. The people there are in another mood. All of them agreed to help us, but they back up each other 100 percent.”

Rooted in Colombia and based in New York, the members of Combo Chimbita have a relatively young history, as they began experimenting with different traditional musical styles during their late night residencies at Barbès in Brooklyn in 2016.

Watch the video below and follow the band’s touring schedule, which include a couple of New York City dates in early 2018, here.