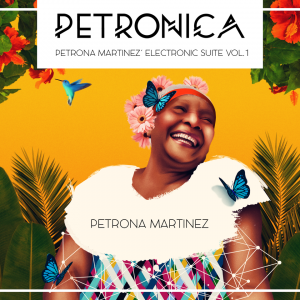 Petrona Martínez, one of the most  well-known bullerengue singers from Colombia, took the long route to success and fame. It wasn’t until 2002, at age 63, that she was nominated for a Latin Grammy for her “Bonito Que Canta” album.

As such, it’s fitting that at age 76, she presents a new album featuring the first “official” electronic suite of remixes of her music.

“PETRONICA Electronic Suite Vol.1 Petrona Martinez,” was produced by Chaco World Music and Mayte Montero, and features wonderful remixes by artists and DJ/producers from around the world, all whom collaborated with Martinez’ and members of her original production team.

First, a quick primer on the style of music that Petrona Martinez not only excels at, but grew up with in her blood: Bullerengue is an Afro-Colombian dance rhythm originating in the small towns of Bolívar and Córdoba counties in Colombia. A dance rhythm born during the African fight for freedom from slavery, it was originally sung solely by pregnant women confined to their homes and thus unable to attend village dances. The melodies were passed down through the generations.

That this electronic remix album honors a singer of a style of music that was sung by women who were unable to go to dances is ironic, as dancing is precisely what this record aims for the listener to do.

The collections contains a palette of different genres and styles including house, electro, drum n ‘bass, afro-beat, minimal, tropical bass, lounge and pop among others. Over 500 hours of recording were necessary to complete Petronica in 20 cities worldwide including Bogotá, New York, Los Angeles, London, Madrid, Buenos Aires, Amsterdam and Athens.

The first track (and video, which stars Martinez and her family), “Las Penas Alegres (Electrochalupa)” by Los Angeles’ Palenke Soultribe fits right in at the next global bass party or high energy gym class, though it keeps the authenticity of the Colombian percussion. Track number 13, “Mariangola’s Dream” by the Mykonos, Greece, -based Xenia Ghali, is ripe for the EDM festival circuit.

The third track, “Oye Mi Mama,” is perhaps my favorite track on the record. By Dutch producers, A.I.F.F., the remix is authentically Afrobeat, with great horns.

Another favorite is track 10.  Uproot Andy‘s rendition of “La Encuera.” In “La Encuera 2.0,” he speeds up the beat, and kicks it up a notch with a global bass flavor. Going to be killer at the next “Que Bajo?!”

Champeta is really having its moment in Colombia and beyond these days, so we’d be remiss if we didn’t mention a wonderful “electrochampeta” remix of El “Gavilán Negro,” the original which is heavy on the vallenato. Not to worry, the remix by New York’s Chris Castagna with the Mystic Aliens keeps the accordion, but marries it to some hip-swiveling electronic champeta.

Other great tracks on this album are remixed by Spain’s DJ Panko, Colombia’s Sidestepper, and Colombian rockers, Doctor Krapula (and, yes, it’s a rock remix!)

Watch the video for “Las Penas Alegres (Electrochalupa)” and pick up the album here.