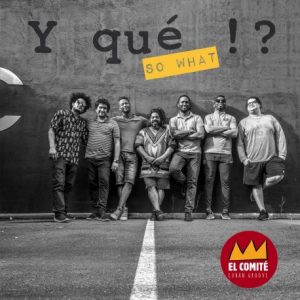 Here’s another fine Cuban jazz pianist to get into… Harold Lopez-Nussa was featured on Gilles Peterson’s Havana Cultura project. Here, as one of seven committee members committed to “Cuban groove”, he’s given plenty of room to swing. El Comité are a septet of Cuban young guns, whose product is pitched somewhere between the intricate Latin jazz of Ray Barretto’s New World Spirit and the no-messing straight-ahead swing of Art Blakey’s Jazz Messengers circa Lee Morgan’s tenure on trumpet. Add a pinch of Chucho Valdés and a hint of Roberto Fonseca and you’ll get the picture.

Lopez-Nussa’s fellows are Gaston Joya on double bass, Rodney Barreto on drums, Yaroldy Abreu on percussion, Rolando Luna on piano and keyboards, Carolos Sarduy on trumpet and Irving Acao on tenor. Individually, they’re all experienced and more than adequate soloists, but it’s the way that they meld together with such seeming synchronicity that makes this album so enjoyable. It’s easy listening, Jim, but not in the pejorative way that we know it. The fluency and apparent effortlessness, though, come from much practice. Having got together on stage in Toulouse back in October 2017, they decided that they shouldn’t stop there.

This album was the next logical step. Nine months in gestation, Y Qué!? (So What) was recorded at Studio Elixir, also in Toulouse. Apart from Gabriel Hernandez’s “Son à Emiliano” and, obviously, Miles Davis’ evergreen title track, the seven other numbers are all compositions by individual band members. Lopez-Nussa contributes the first two numbers: “Gran Vía” is a hard-riffing stomper to get you in the mood, while “E’ Cha” sets up a lovely Ray Barretto-like groove, urged on by Yaroldy Abreu’s chattering congas. Carlos Sarduy also contributes a pair: “Carlito’s Swing”, a feature for his burnished trumpet, starts slowly before settling into a lovely summery vibe that builds to an infectious descarga; and the stand-out “Alamar 23”, which highlights the benefits of the unusual two-keyboard line-up, with Rolando Luna’s organ and Lopez-Nussa’s (acoustic and electric) piano swinging in tandem. Bassist Gaston Noya contributes the intricate “La Gitana”, whose shifting time signatures echo Irakere. There are further echoes of that great Cuban band in Rolando Luna’s arrangement of “Son à Emiliano”, and his own “Transiciones” does indeed go through several transitions that make for a classy composite. Saxophonist Irving Acao’s “Nada Más” is a deft, melancholic ballad that modestly leaves his own solo till last. As for “So What”, the band takes it at a slightly faster lick than its composer might, but it works a treat.

It all adds up to 50 minutes of swinging, big-hearted and eminently accessible Latin jazz that should appeal to anyone with a feel for “Cuban groove”. El Comité get it right on the money from first note to last.