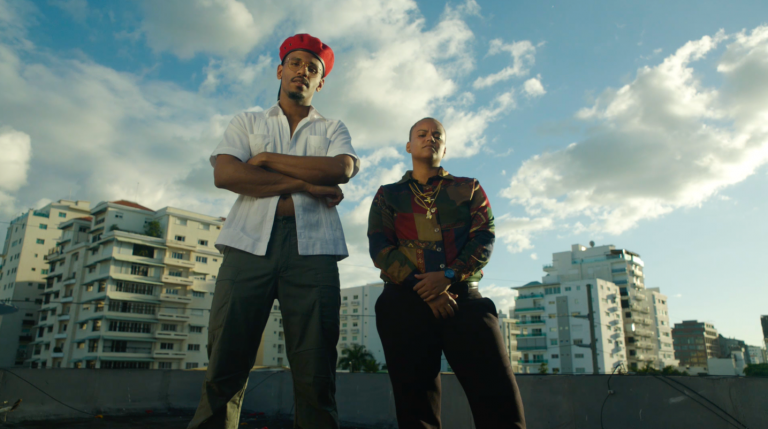 Can you say summer vibes (in the winter) banger?

NYC’s Saso transports us to a party in a warm climate in this latest video for his track, “Sazón,” which features the Bronx-raised Dominican living his best life (dancing, swimming, eating sancocho, and getting bathed by two lovely ladies), over a fantastic baile funk beat courtesy of Bronx DJs Dos Flakos with vocals by newcomer Michy Mata. (The last full minute of the video, directed by Andrew Adames, gave us serious FOMO. Dear Bronx: Next summer, we are coming for you!)

Saso has a new EP, Diaspora, which he says is a “project accentuating a glimpse of my musical influences from spending half of my life in the Dominican Republic and the other half in New York. We’ve mixed the innovative grooves and flows of Baile Funk coming from São Paulo, Brazil; the banger infused thumps from New Jersey popularly known as “Jersey Club” and the heavy trap elements taking over the globe today.”

We talked to Saso so our readers can get to know him and the Bronx artist he inspired to pursue music on her own right:

Sounds and Colours: How and when did you start making music?

Saso: I’ve been making music since i was 16 years old and with over seven years of constant writing and honing my craft, I decided to take music seriously as a career over eight months ago.

Saso: My song-writing process is very random and eclectic. I constantly have random one-liners, flows and melodies inside my head, compiled from so many genre influences. I usually have at least a melody and a flow in mind before  begin to direct/compose any music. The sonical products that I’ve created today is substantive proof of the many influences that constantly bombard my brain.

S&C: You were born in New York City, raised in the Dominican Republic, and then brought back to the States, to the South Bronx, as a pre-teen. We see those influences come through. Tell us how the Baile Funk came into play.

Saso: My influence for Brazilian Baile Funk grew when i began partying in the lower east side, Chinatown and Brooklyn. Bronx kids used to be a bit closed off and remained within the borough. However, when I began to explore my city more, i was introduced to the genre that will eventually change my musical palate: Brazilian Baile Funk. I have the gay/trans community in these underground clubs to thank for that. Baile Funk is prevalent in those club scenes.

S&C: Who is Michy Mato? Is this another Bronx-based artist you are helping to bring up?

Saso: Michy Mata is “Sazón.” The way I came up with the song was when I heard this loud mouthed/raspy voiced woman screaming the chorus from the other side of a summer party. Something immediately clicked in my head saying “This is it, this is the song i was looking for.” Afterwards, without knowing who she was, I approached her with an idea that would eventually change our lives. She never made music before, so me and with the help of the production of Dos Flakos, we ensured that Michy’s voice was the rope tying all of this together. Consequently, we’ve inspired Michy to do music of her own. We have placed her under our wing and is currently working on her own projects.

S&C: What is your music trying to put out there?

Saso: What I try to convey in music is happiness, euphoria, nostalgia, dopamine-filled excitement and awareness. My music screams “IT’S OK TO BE A HOE, AS LONG AS YOU RELAY A POSITIVE MESSAGE.” I talk about very heavy and woke concepts, but not without adding a funky dance worthy beat that makes your chest pump and twerk. Wrapping it all together as a way to emphasize the influx of musical influences around world and showcasing the African Diaspora.