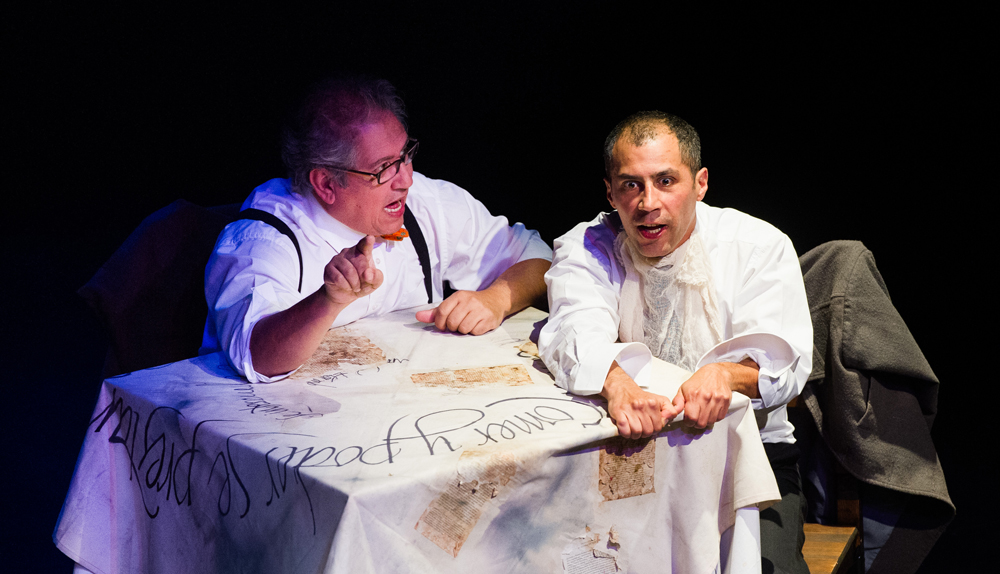 This year the CASA Latin American Theatre Festival, now in its fourth year, assumed a political theme, boldly confronting a variety of topics, from imaginary dictatorships to the very real horrors faced by Bolivian migrants. La Razón Blindada, performed by Ecuador’s highly acclaimed Malayerba theatre company, majestically steps up to the task, illustrating one of the most brutal periods of South American history, the Dirty War. Yet the play never makes explicit mention of the war, focussing instead on the daily lives of two prisoners and their weekly performances of the Golden Age epic, Don Quixote.

The opening scene is a rather surreal choreographed dance, with Sancho Panza copying Don Quixote’s measured limb-stretching, hand-twirling and neck-rotating. They are seated, and seem able only to explore the space surrounding their chairs, immediately establishing a sense of entrapment. Incidentally, the characters never leave their chairs and the prison’s four walls are deftly constructed by this decision. We are then instantly thrust into a reinvented narration of the epic tale of Don Quixote, interspersed with snippets of conversation about their daily life – the hunger, loneliness, the restrictions which allow them only to meet on Sunday. The dialogue is initially rather confusing, and further hindered by the awfully-timed surtitles, making it difficult to engage with either the ‘real’ conversations or the vivid narration of their chosen epic.

Yet as the play continues, its foundations are cemented, and we begin to understand that this rapid interchange between the real and the imagined is key to their survival. The ability to spontaneously delve deep into their imaginations and provide but a moment’s distraction from their daily mundanity is in fact their only means of retaining their sanity. The chairs and tables are mounted on wheels and are effectively used to emphasise this, as the characters whizz across the stage in bursts of mock freedom.

Aristides Vargas, who also wrote the play, gives a spectacular performance as Sancho Panza, the rather feeble but sensible counterpoint to Don Quixote’s unfettered and romantic temperament. Much of the play’s humour is derived from Don Quixote putting Sancho Panza on the spot, calling him Dulcinea, his lover, or Tiribio, his faithful greyhound, as his cue to immediately slip into character. Sancho Panza is always initially offended at being cast in these roles, but his obedience soon overcomes his initial reluctance and he delivers an extremely funny monologue about the situation of the film industry’s dogs who are all sickeningly twee, Lassie being its main victim.

Such scenes highlight the madness and wistfulness of Don Quixote, and are testament to Vargas’ excellent tragicomic writing. Ironically, just as we are convinced that the narration of this epic tale is the prisoners’ sole means of retaining their sanity, we understand that Don Quixote is confusing himself with his often ridiculous character, propelling himself perhaps into further madness.

The line between the real and fictional elements of the characters becomes increasingly blurred, and this is exactly where the strength of the play lies. It purposefully withholds all details about the brutalities of the political situation, never allowing us to pity the characters, but instead drawing us deeper into the vivid fictional world the prisoners have created for themselves. It is only at the end that a short film is projected onto the back wall, informing us of the camps in Patagonia where thousands were kept as political prisoners. A further fascinating post-show talk revealed that the prisoners were only allowed to meet for an hour every Sunday, and would act out excerpts of stories and plays, advertising them to each other on cigarette papers. Vargas, whose own brother was kept in a Patagonian prison camp, emphatically stresses the hellish nature of these camps. Yet ultimately the play is not intended as stone-cold evidence of the horrors of the Dirty War. It is a moving testament to the singular power of the imagination and man’s will to endure, even at the cost of his sanity.