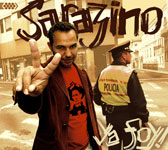 Sometimes it takes fresh ears to see the big picture. This can certainly be said of Sarazino, the brainchild of Lamine Fellah, a musician and producer based in the high altitude of Quito in Ecuador. His new record, Ya Foy, has been gaining plenty of plaudits thanks to its mix of latin grooves, reggae vibes and any other style to get the party started. It’s a fine achievement, which most likely would not have been possible by someone raised in a Latin American country.

Lamine hails from Constantine in Algeria. His father’s role as a diplomat resulted in him moving around the globe, spending time in Spain and Switzerland, with the wandering spirit embedding itself in Lamine’s psyche. While living in Africa, the young Fellah was exposed to many different varieties of West African music styles as well as reggae, which was very popular in Africa at the time. At an early age, Fellah was introduced to Arab-Andalusian music and Spanish flamenco by his mother, and grew up listening to popular French music.

In 1984, when he was 14 years old, Fellah bought his first drum set and soon became interested in writing his own music. Fellah was living in Burkina Faso at the time, and the fertile musical environment inspired him to form a band with some local friends. In 1988, Fellah moved to Canada to get his degree in political science and economics at the University of Montreal. His true passion, however, remained with music. Montreal’s active nightclub and festival scene gave him plenty of opportunities to explore new sounds.

In 1993, tragedy befell Fellah’s family when Islamic radicals in Algeria assassinated his father and forced the rest of his family into a life of exile from their homeland. This intensely personal confrontation with fundamentalism and violence had a great impact on Fellah’s music, which emphasizes the need for personal and political freedom while encouraging people to love their neighbors and celebrate our commonalities as well as our differences.

Fellah formed the original incarnation of Sarazino in Montreal in1995, and the project’s first album was released in 1997. While all of the songs on Et Puis Voila were in French, the music fused African, Algerian and French influences. The album was well received, but it was not a huge commercial success, and Fellah decided to focus on traveling and exploring the world.He would call Montreal his home for fifteen years before eventually discovering Latin America, particularly Quito which he decided to call home. Ya Foy! (which means “no problem” in the Dioula language of West Africa) was released on Cumbancha Discovery last year. It features guest appearances by Jamaican roots reggae legend Toots Hibbert of Toots and the Maytals fame and Blanquito Man from the Latin ska/rock band King Chango. It’s mix of African vocals, jamming electric guitar riffs, dancehall shout outs and fun, funky reggae has proved to be a big hit with PopMatters calling it “a vibrant, bubbly mix of reggae, funk, hip-hop, and even raï” and AllMusic simply putting it: “good pop/rock and reggae songs with enough exoticism and class to stand out from the crowd.”

For those lucky enough to be in North America over the summer Sarazino has lined up a number of dates, performing the songs from Ya Foy: