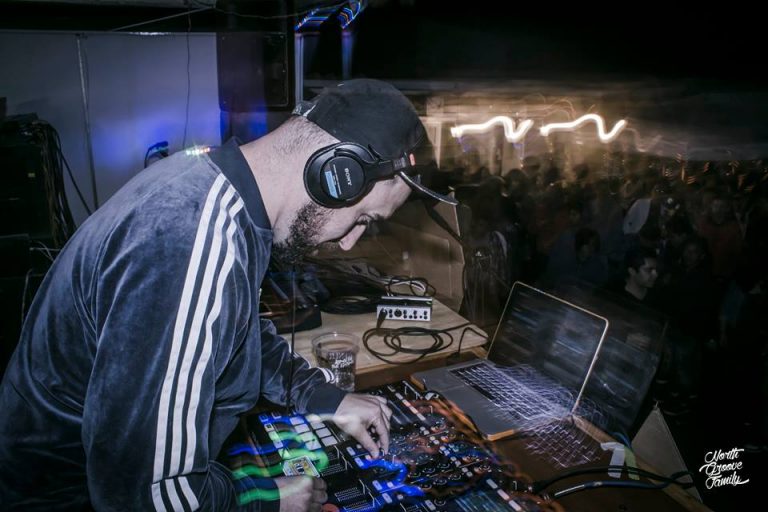 How do rappers mature musically as they grow older? After 20 years as an MC, Juan Cobo aka Guanaco, one of Ecuador’s finest representatives of hip hop, left the capital for the mountainous city of Baños, where he found the inspiration for his new project, the EP Monte Abajo.

Not spitting rhymes this time, Guanaco felt like exploring the art of beat-making to ‘recreational ends’.

“This project expresses the bliss I experienced when I moved to Baños – the album’s title literally means ‘down the mountain’.”

Under the pseudonym of Guanchaka, the rapper explores the soundscapes of Andean cumbia, but also Caribbean dembow and other genres, recording organic drums (timbales, congas, bongos) and adding electronic rhythms with very little use of sampling.

“I was influenced by popular culture, especially from the province of Tungurahua where I come from, as well as the sound of Eduardo Zurita’s organs, Don Medardo y sus Players and this type of cumbia,” he recalls.

Communities living in this province have many stories of “unidentified flying objects and other funny things,” giving Guanaco’s final project a spatial and futuristic vibe, translated both in the music and the album cover’s artwork.

The experiment was not completely unfamiliar to the MC, who initiated the night Urban Beatz with Javier Salazar over 10 years ago, mixing a large palette of global bass sounds.

The four-track record is conceived as a head-trip into spatial mountains, reinventing the folkloric tradition of Ecuador’s musical repertoire in a modern setting.

The album opener “Cumbia Mañanera” portraits the Baños sunrise with the early chant of the roosters and the clouds wrapping the top of the mountains, while the next track “El Ocelote” pays tribute to Ecuador’s biggest feline – also known as ‘tigrillo’ or wild cat.

But besides the celebration of nature, Guanaco did not forget his urban roots: the eponymous last track “Monte Abajo” leans towards dub-inflected rhythms that recall Guanaco’s very first musical project, the reggae band Sudakaya. In “Marroneo Espacial,” a psychedelic interpretation of dembow, the marroneos refer to a type of dance developed in the coastal city of Guayaquil by the Ñengositos, who are teenagers from working-class neighbourhoods fanatical about Puerto Rican reggaeton star Ñengo Flow.

As for production, Guanaco teamed up with his long-time friend Emiliano Gomez, known as ‘the son of Cumbia’ and founder of the Swedish-Argentine record label Wanka Tanka Records.

This EP clearly proves that 20 years after starting a career in hip-hop, rappers don’t need to be young to stay hip.

Monte Abajo is available from Bandcamp. Listen to it below: