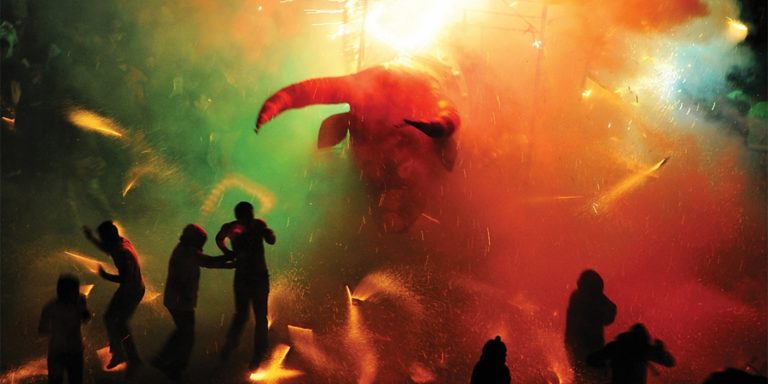 Tultepec in the State of Mexico is no ordinary place. It’s a town where fireworks are more than just a gorgeous finale in light and gun smoke: they are its beginning, middle and end.

Director Viktor Jakovleski’s documentary, Brimstone & Glory, focuses on the National Pyrotechnic Festival, an event which to outsiders will appear more like a cosmic happening than a mere firework display. This may sound like hyperbole but Tobias Von Dem Borne’s excellent cinematography doesn’t lie.

Over a period of nine days, culminating on March 9th, the film records Tultepec’s San Juan de Dios festival, paying homage to the patron saint of fireworks, who we are told, got the moniker for rescuing patients from a burning hospital.

Hospital is an occupational hazard in the world of pyrotechnics and Tultepec is no exception. It has had its fair share of disasters. A fire engine drives past a proliferation of single storey container-sized buildings marked with “PELIGRO”; they mean what they say. Symbols and images of danger and death abound. This is the town that health and safety forgot. There are two big days, both covered in the film: Castillos del Fuego, and the Pamplonada/Toro Rey (a running of burning bulls issuing fireworks), which is like San Fermín, only on peyote.

There is industry everywhere – men, women, boys and girls – who with no small degree of insouciance work on every aspect of firework production. When a man puts a cigarette to a fuse he disappears in a light of such intensity that when an image of San Juan de Dios appears it is easy to believe it is a miracle. How could anyone have come out of that unscathed? It’s a competitive business too. Teams from the town and around compete to put on the best display.

There doesn’t seem to be a person in the place who isn’t mixing saltpetre, sulphur, titanium and charcoal, packing wadding into cartridges, laying out and cutting fuses, or stuffing grenade-shaped bombs into mortar tubes. When one of the men says, “we are not chemists.” you have to wonder how the town has remained on the map as long as it has. Disquiet is further fuelled by a man with a missing hand who is priming a lot of flare-sized fireworks.

Castles in the Sky

In amongst it all structures like electricity pylons (the castillos) are being assembled and decked with a filigree work of explosive charges. The scale is monumental and you can quite see why the local A&E is being prepped. The results are extraordinary in a way that the usual ‘oohing and aahing’ doesn’t quite encompass. This is a display that prompts awe. When lightning kicks off the event early, you can’t help but wonder if this is going to be the start of a full technicolor national disaster deserving of an epic musical score.

In the half-light and with background sound effects supplied by the voices of excited adults and children, highly decorated and illuminated bulls on wheels make their entrance into the packed streets. The bulls, often ablaze and always erupting with fireworks, careen through the crowds.

The finale in the main plaza is like a billion giant fireflies set loose during the formation of a nebula: it just doesn’t seem terrestrial at all. There are also pyrotechnic flourishes reminiscent of the Totonac Danza de los Voladores (Dance of the Flyers) to complement the spectacle. The footage is breathtaking. Silhouetted figures dance like spectral puppets in amongst it all. It is palpable. You can almost taste and smell the sulphurous whirlwind of primal forces.

This documentary is a fascinating take on a culture in which drama and chaos often rule over order and control. Mexico is not a simple land or culture. This film conveys the crazy ambience of this popular festival but also gives an insight into a place where fireworks (natural and man-made) are very much part of life. Even the dinosaurs found this out.

Those planning a trip there would be well advised to don welding goggles and fire-retardant sun tan lotion.

Brimstone & Glory opens at the Nuart Theatre in Los Angeles on October 27, and at the Quad Cinema in New York City on November 22, followed by other U.S. cities including San Francisco, Washington D.C., and Chicago.