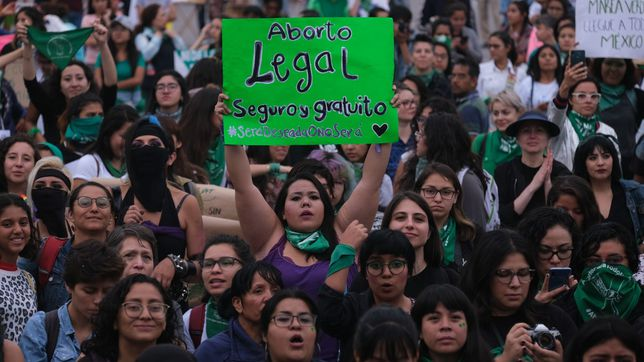 In Latin America, the women’s movement began campaigning for reproductive rights in the 1980’s and September 28 was chosen as a day of action demanding access to free and safe abortions. This campaign started during the fifth Latin American and Caribbean Feminist Encuentro (Assembly), held in Argentina in 1990, and since then has spread throughout Latin America in the green ‘pañuelazo’ campaign, and it is now recognised as a global day of action around the world. In Latin America, over 600 women’s organizations and groups are part of the campaign and every year they take to the streets in widespread protests and local actions to demand women’s reproductive rights.

Over 4 million women have abortions every year in Latin America and complications from unsafe and clandestine abortions are the leading cause of death in many countries where abortions are illegal. There have been gains in several countries including Argentina, Uruguay, and Chile, and most recently in Colombia. In Mexico, further reforms were introduced earlier this year to the 2007 abortion law, liberalizing abortion laws in the capital city and extending these to eight other States (Conservative governors had previously amended their states’ constitutions to define life as beginning at conception, which criminalized termination of pregnancies).

But the struggle isn’t over, and on Sept 28 women again marched through the streets of Mexico demanding that the law on abortion rights be extended throughout the country for all women to have access to free and safe legal abortions.

Some countries in the region have the most restrictive abortion laws in the world, among these El Salvador and Nicaragua – where there is strong opposition to reform, especially from religious and conservative sectors. Terminations are prohibited on any grounds and women are criminalized even if they have had a miscarriage due to obstetric complications. But this was not always the case. In Nicaragua in 2006 the Congress outlawed therapeutic abortion, stripping women of rights they had held for over 130 years. Today, Nicaraguan women and girls who become pregnant as a result of rape or incest are faced with the choice of giving birth to an unwanted child or undertaking a dangerous, unregulated, ‘back-street’  termination of the pregnancy.

The situation in Nicaragua shows how hard-won rights by the women’s movement can be stripped away by authoritarian governments. The following call for action from women in Nicaragua highlights the wider repression of women’s organizations and the struggle to defend women’s rights. This communique was disseminated by the Nicaraguan Campaign for the Decriminalisation of Abortion in Latin America, a call to strengthen feminist solidarity with Nicaraguan women on this significant date.

Calling for The Right to Choose

‘From Nicaragua, where we have sustained the struggle for the right to choose for over 37 years, we are calling for the strengthening of feminist solidarity at regional and international levels. Join with us to demand an end to the repression and the violations of the human rights of women and girls and of the population overall.

For many years the dictatorship of Ortega and Murillo has curtailed women human rights defenders, and since April 2018 has extended prohibitions and censured all forms of organization, political participation, and freedom of expression. They have taken absolute control of our national territory: we now have surveillance in every neighbourhood and region, sieges, threats, persecutions, and kidnappings.

At least twenty women – many feminist militants – are currently being kept in absolute isolation and confined in torture centres, wrongly called ‘prisons’. They have been given long sentences meted out by the repressive ‘justice’ forces at the service of the dictatorship. They are experiencing sustained hunger, cold, and isolation at the hands of their captors. Their resistance is our strength.

In Nicaragua, women are unable to exercise their right to choose in any sphere of their lives. Since October 2006 the ‘revolutionaries’ of the FSLN, who have the votes of fundamentalist sectors and parties, penalized absolutely the interruption of pregnancy. The damages of the prohibition of abortion on all grounds, the complications to women’s bodies, and the deaths of many women as a consequence of unsafe abortions are not reported. They hide and manipulate the number of maternal deaths from complications of risky pregnancies as a result of the lack of sexual education, access to secure methods of contraception, and by sexist violence – abuses that are tolerated and promoted by an oppressive state, which generates even more atrocious femicides.

The dictatorship wants to quash all forms of resistance through the closure of dozens of women’s and feminist centres, improperly appropriating all their goods, equipment and buildings and eliminating the legal status of organizations and women’s community radios. This has led to the loss of spaces for reflection, education, treatment, assessment, training, and the dissemination of rights for thousands of Nicaraguan women, especially those most marginalized by patriarchal neoliberalism.

Women human rights defenders who are still living in the country are forced to live a clandestine life in permanent stress, like all others who oppose the dictatorship.

For all these reasons we urge you to renew your solidarity and to loudly demand the right to choose in Nicaragua.

This article was kindly republished courtesy of Latin American Bureau. You can read the original here.