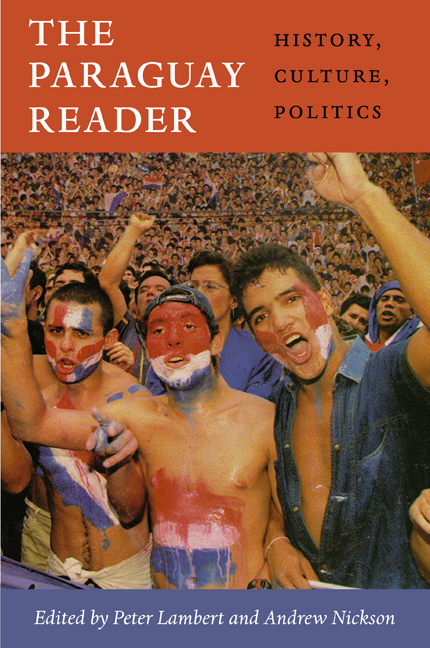 The Paraguay Reader, edited by Peter Lambert and Andrew Nickson and published by the Duke University Press, is an attempt to raise the stock of a country which historically was described variously as: “the Tibet of South America”, “the China of South America” or the “New Arcadia.” When it comes to believing all you hear – as some immigrants to Paraguay have found to their cost (The Tragedy of Fram by Jorge Rubiani, 1955) – it’s a case of caveat emptor.

A Walk On The Wildside

Paraguayan writer and intellectual, Justo Prieto (1887-1982), writing in A Nation Held to Hostage, described the physical landscape that greeted the conquistadores: “Paraguay was protected by deep rivers to the south and east, immense unexplored forest to the north, and the mysterious desert of the Chaco to the west, where the indomitable Payaguas and other nomadic tribes served as fearsome sentries patrolling the river in their swift canoes.”
However, over the centuries as this book indicates through many of the excerpts, the most fearful obstacle and threat in Paraguayan history comes not from the physical landscape, the hostility of tribes or disease but the political and human shortcomings of its government and governance.

All countries suffer from a degree of stereotyping. Who, on the two thirds of the world’s surface colonised by the British, for example, would recognise “our sense of fair play?” Sometimes the fabric of history is woven into spells by those who can make the “heart of darkness” sound like a pleasure cruise.

From the colonial period to the modern day, this volume lays out the salient points and paints – with telling testimony both domestic and foreign – how history has shaped Paraguayan culture and identity. Frankly, much of it leaves you with your head in your hands. Horror abounds. It’s one crime against humanity after another. There’s the encomienda system – forced labour/slavery – in which indigenous men and women become work and sexual (rancheada). Then there’s the life of the indentured labourer – evinced in a description of the quebracho (axe-breaker) loggers and the yerba mate mineros – heinous tales of sadism – worse than slavery because they appeared to offer hope.

Tragedy then gets heaped on tragedy. The War of the Triple Alliance in 1886, precipitated by the meeting of President Francisco Solano López’s posturing, necrotising megalomania and the outright chicanery and duplicity of Brazil and Argentina, led to a 25% reduction in Paraguayan territory (half of Missiones went to Argentina and all of Mato Grosso to Brazil – 55,000 sq. miles in total) and the death of 90% of the country’s adult male population (the country’s total population dropped from 450,000 to 150,000); it also had to pay reparations.

The Chaco War of 1932-1935 with Bolivia – another territorial dispute with an underlying supposition that the arid thirst-inducing Chaco was sitting on oil deposits – left another 40,000 dead on the Paraguayan side. Over the course of the war, which Paraguay won, thirst, hunger, disease and suicide accounted for more deaths than combat.

The next event in Paraguay’s history – not the usual Liberal presidential musical chairs – set the scene for most of the 20th century. The short Civil War of March to August 1947, also known as the “Barefoot Revolution,” pitted incumbent President Higinio Morínigo and the Colorado Party against a marriage of convenience formed of the Liberal Party, the Febreristas and the Paraguayan Communist Party. For the first time, Alfredo Stroessner, then an artillery commander entered the political scene and played a decisive role in the result.

It’s estimated that 55,000 died during the conflict and subsequent reign of terror and a third of the population fled to Argentina, Brazil and Uruguay.

Bring Me The Conscience of Alfredo Stroessner

The excesses of the colonial era gave way to entrenched dictatorship and the backbeat – the irresistible rhythm of the piece – in that over much of its history the lot of the Paraguayan – indigeno, mestizo, black or poor – has been miserable.

Arguments rage over what the dictatorships of Dr. José Gaspar Rodríguez de Francia (1814-1840), Carlos Antonio López (1840-1862) and Francisco Solano López (1862-1870) actually did for the country. All agree that they were the anvil on which nationhood and nationality were shaped – for better or worse. Of the three, de Francia and López got the best press; the former for some of his more bizarre policies, such as suppression of the church and prohibition of marriage between Europeans. These, backhandedly, proved cohesive. Similarly, López, largely for the same reason of cementing the nation state, introduced railways (the first in South America), a shipyard, a foundry and an industrial smithy in an attempt to diversify the economy away from low value primary products (timber, tannin and agricultural products).

Francisco Solano López’s legacy is more complex. Being partly responsible for a war that killed 64% of the population and reducing the size of the country by 25%, he has become to Paraguay what Thermopylae is to the Greeks: a transcendent and historically defining person/place in the nation’s history. Enter: Monty Python’s Black Knight. No wonder people are suspicious of nationalism and the nation state.

Even to this day, Paraguay – as the impeachment of President Fernando Lugo in 2012 evinced – is a democratic puppet show.

The Paraguayan sociologist, Marcial Riquelme, referred to the Stroessner era (1954-1989) as “neo-sultanism”. Well, even post-Stroessner you’d struggle to find too many signs that the pernicious satrapy of the Colorado Party has been curtailed. It’s still the leading party by seats and its influence spreads through the country like bindweed. Half the country lives in poverty and 19% in absolute poverty.

Despite the lofty plans of the incoming Lugo administration in 2008, little has been done to tackle the recurring themes of landlessness, injustice and poverty. Add what the country is doing to its landscape – systematically destroying it by the hectare for soya bean farming and cattle ranching – and you have to wonder about the human capacity for reason. You also have to wonder how those good Christians in the Mennonite and Brazilian colonias can be so sanguine about dispossessing and destroying the lives of people who’ve been in situ millennia before Christ.

Holding Out For A Nero

Ideas of nationhood and national identity have to deal with what is there but the final presentation is always Identikit and subject to revision. In the Paraguayan example, anything contentious goes straight under a highly embroidered carpet; torching your own biosphere becomes land reform; disasters become triumphs; politicians liken themselves to Jesus; kleptocracy, graft and contrabandismo become “democracy” and terror, persecution and poverty are presented as peace with security. It’s ancient Rome prowling on the Paraná. History, like every intellectual exercise, requires a strong nose and a capacity to endure the malodourous and unpalatable if it is to stand any chance of being real.

Helio Vera, the Paraguayan journalist, writer and lawyer describes it aptly: “The past exists not as history but as legend. We do not have historians but troubadours, emotional singers of epic tales, tear-jerking guitar-playing poets of the past.”

From Here To Obscurity

As the book explains, now and again Paraguay emerges into the world’s consciousness, as FIFA World Cup minnows or in a film like The Mission (1986), about the Jesuit reducciones (obedient, indigenous, self-sufficient communities) starring Robert de Niro and Jeremy Irons, only to disappear once again into obscurity. More recently it has come to prominence for destroying its own environment, permitting the illegal expropriation of indigenous land and being blackballed from UNASUR and Mercosur (until elections in 2013) for impeaching its own president by means totally unconstitutional and illegal.

The Paraguay Reader is an excellent compilation of literature, folklore, anecdote, reportage and academic research. It illustrates the indomitable capacity of the Paraguayan people. In the heroic shorthand of a nation – which exudes the “warrior spirit” of the Guarani – you have to acknowledge the sheer stoicism – or is it the death of memory? – required to endure such iniquity. What’s more in the face of the destruction of the “word”, synonymous with the “soul” in Guarani, the people have not only sidestepped the colonial yoke they have transcended it on one level at least. Despite all efforts, Guarani is the mother tongue. Spanish is the lingua franca of government, officialdom and little else. Similarly, miscegenation has created a culture which offers the most bewildering form of heterogeneous homogenisation. Helio Vera cooks up all the ingredients in Doña Petrona’s Recipe.

There’s a lot to be said for a melting pot but who would want to tell the Ayoreo – the “uncontacted” – like the Aché and others tribes before them, that they don’t live “here” anymore? This belongs to the Mennonites, Brazilians and Paraguayans; the ranchers, the soya bean farmers or “someone” who lives in Asunción. As Mateo Sebode Chiquenoi, an Ayoreo and former president of the Unión de Nativos Ayoreo de Paraguay put it: “why should they leave the forest to come and live in poverty and in fear of being themselves.”

We’ve been here before. Sitting Bull made similar observations at the Powder River Conference in 1887.
Nice job. If this is an example of the quality of this Latin America Reader series – I’d strongly recommend it.

The Paraguay Reader: History, Culture, Politics is available from Amazon