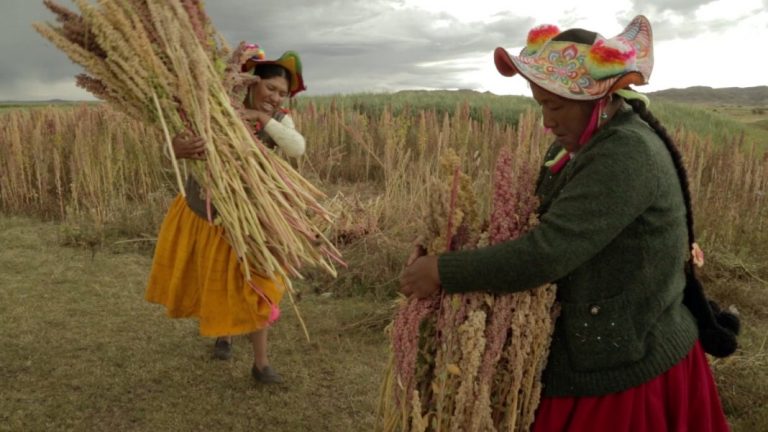 The documentary Mothers of the Land is as an eye-opening report on the threats to Quechua culture posed by capitalism and climate change. The film expresses these risks and challenges through patiently focusing on the everyday, traditional way of life of female farmers in Cusco and Puno, demonstrating just how much effort and time goes into cultivating native crops. Article originally published via Latin American Bureau.

Sembradoras de Vida, the award-winning documentary by Álvaro and Diego Sarmiento, documentarists of Quechua origin, is a beautiful and eye-opening observational film. It manages to tell an alarming story of the threats of capitalism and climate change, through the calm and poised demeanour of the Quechua women at its heart.

The film follows five Andean women farmers in southeastern Peru, in scenes of everyday agricultural life. We see the women planting from dawn to dusk, chewing on coca leaves for energy and engaging in everyday rituals.

The beautiful establishing shots of green and coffee-brown hills, placid lakes and dwellings sprinkled among the valleys, show just how remote and isolated the land is. Local farmers are mostly self-sufficient and thus native crops like corn, quinoa, potatoes are central to the way they live.

However, it soon becomes clear that the natural rhythm of seeding, nurturing and harvesting is at the mercy of capitalistic demands, which are out of sync with Quechua values.

The women explain how Quechua beliefs explore the symbiotic relationship between human beings and nature. They point to themes of duality present in the elements: in the sun and the moon; in night and day; in female and male energy. These gendered energies extend into the elements: female lakes receive offerings and much like women, the soil is able to create life.

Whilst some farmers may sell their crops, this is a rare occurrence and rural workers must remain patient if they are to profit from the deliberately slow farming process. Locals — unlike big organisations — do not rely on the overproduction of crops to make a living, and according to the farmers, crops produced using chemical pesticides do not have the same quality, taste or size as those grown using traditional farming techniques.

Rural residents believe industrialisation is the root cause of a number of health conditions, as mass-produced crops lack the necessary nutrients, and cause scarcity because of the way the land is treated. However, the food industry, they note, does not care.

As tends to happen elsewhere, those with limited resources are the ones who suffer the most from climate change. When survival is dependent on moon and rain cycles, the situation becomes even more critical. In the film, Quechua farmers share their fears and predictions on what will happen to their community if the present conditions persist.

Wanting to preserve part of their heritage, farmers travel to Svalbard Global Seed Vault in Norway in an effort to protect their native seeds in the case of a global catastrophe. The moment is bittersweet: whilst they are happy to store the seeds for the future, departing from them feels like saying goodbye to a family member.

Through patient, observational filming, the film offers an emotional understanding of how the eradication of ecosystems not only poses a threat to the livelihood of many Quechua farmers, but also threatens their very identity.

Illustrating the destructive impact humans have on the earth, the film serves as a wake-up call, framing climate change as a social ill: a destructive by-product of centuries of colonialism.

The film also serves as a weapon of resistance, focusing on everyday life in a remote corner of Peru, telling a story from the perspective of indigenous women and filming in Quechua – a language, which despite suffering a decline in its usage due to the social advancement associated with Spanish, persists. Quechua, like native corn and quinoa, is a potent symbol of perseverance celebrated through this beautiful film.

More information on Sembradoras de vida can be found here.