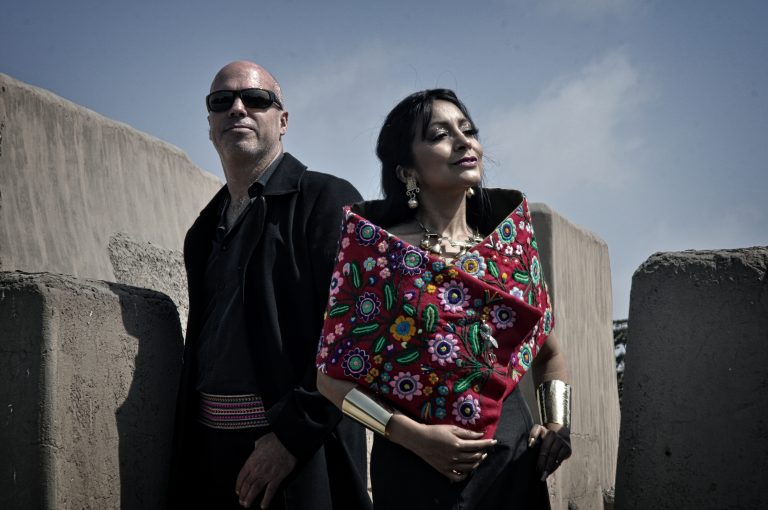 PREMIÈRE: We Speak to Punku About Their ‘Ancestral’ Vision for Peru (+ Exclusive Video)

Punku is the name for a new collaboration between Novalima musician and producer Grimaldo del Solar, and Peruvian singer Sylvia Falcón. After collaborating on the last Novalima album, Chusay, the two decided to further the partnership, as a way of exploring Peru’s Andean music and traditions, including the lírica andina style of Yma Sumac which has been a big influence on Falcón’s own vocal style. So far, the duo have released one single, “Ancestral”, which now has a video which we are very happy to be premiering.

“Ancestral” makes clear the project’s intent: sparse, explosive beats caress Falcón’s otherworldly voice, with panpipes, field recordings of water and sacred chants from shaman Rawa Muñoz all part of a slowly-building arrangement that is undeniably Andean. The group will be releasing an extended “Ancestral” single on 30th March featuring original, dub and a capella versions of Novalima’s remix of the track.

Watch the exclusive video for “Ancestral” at the bottom of the page, but before that, find out a little more about Punku thanks to our interview with Grimaldo and Sylvia below:

When did you two first meet? And when did you decide to start making music together?

Grimaldo: While working on tracks for the Novalima album Chusay, I came up with a huayno dub and wanted a deep Andean vocalist to collaborate on it. Searching through YouTube I found Sylvia and her amazing lírica andina style, so I wrote her an email and sent her a demo and a few days later we met in a studio to record the track. The outcome was amazing and Sylvia asked me if I could produce her next solo album to which I told her we should do a project together and that’s how Punku was born.

What has been the process of making music together, have you been able to work in the same studio, or has it been a remote collaboration?

Grimaldo: Usually we get together to talk about possible song ideas going through different traditional styles, instruments and possible guest musicians. With this brainstorming, I get in the studio and work on some music ideas and loops and send them to Sylvia so she can work on vocal melodies and lyrics. Then we get together in the studio to record the vocals and other guest musicians like panpipes, guitar, charango or percussion. With all these recording sessions I get back into my studio to work on arrangements and production sending demos to Sylvia and getting feedback until we have it ready for the final mix. On this album we worked with UK-based sound engineer and producer, Toni Economides, who has mixed most of the Novalima albums.

How did you arrive at the Punku sound? Was it through experimenting or did you have certain influences that you were trying to emulate or a particular sonic identity in mind?

Grimaldo: We didn’t have anything planned towards sound or sonic identity. We had it clear that we wanted to do new music that mixed traditional Andean styles, ancestral instruments with modern production and Sylvia’s chanted vocals. So, kind of in the same way Novalima came together, we started experimenting with some samples and recordings of traditional Andean music and see where it took us. Based on these experiments, we recorded with some great musicians like Andean guitarist Ricardo Villanueva, Gisella Giufra on drums and percussion, Chano Diaz on charango and Horacio Camargo on panpipes and Andean sax.

Sylvia, what was the experience like for you of working with Grimaldo, and a lot of electronic elements? I am aware of some of your previous work, which has all been very folk-orientated (of what I’ve heard), so interested to know how you adapted to working in Punku?

Sylvia: Working with a producer and musician with as much experience as Grimaldo in the first place is a great learning experience and a pleasure. I know first hand how difficult it is to work in music inside and outside of producing the music itself, and achieving what they have achieved with Novalima from a musical scene such as Perú is complex and commendable.

I feel very comfortable with Punku’s format because it is not antagonistic to traditional music, but rather complements and enriches it in an exceptional way. I even feel more free to experiment with the possibilities of my voice over this new sound.

Also Sylvia, your singing is often compared to Yma Sumac, someone I know you’ve covered in the past. What is your relationship to Yma Sumac’s music? Has it been a big influence? Are there any other vocalists that have been hugely important to you?

Sylvia: Yes absolutely. Peruvian maestro Moisés Vivanco created a genre that he called lírica andina after being blown away by the voice of Yma Sumac. Learning and disseminating the songs of that repertoire has been a challenge for me, it has helped me to cover a wide spectrum of Peruvian music. Her songs and her voice are really prodigious, I admire Yma a lot as well as the traditional singers of Peru whose feeling is unique. I am a lover of the human voice, so I always go back to listen to Whitney Houston, Edith Piaf, Jacomo Aragall, Cecilia Bartoli, Adele, Celia Cruz…

Finally, what do you hope to achieve with Punku?

We would like to take this new Andean music around the world so people can learn about ancient Andean culture and its connection and respect to nature.

“Ancestral” is released by Six Degrees Records and available from Bandcamp