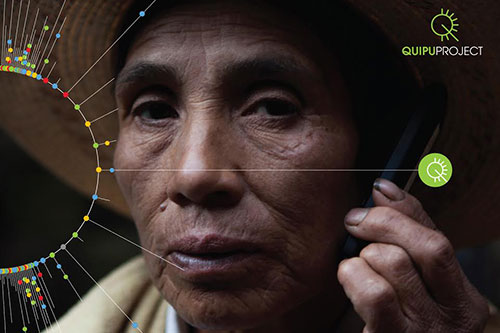 The Quipu Project – Sterilised Women in Peru Raise Their Voices

In the 1990s, more than 270,000 women and 22,000 men were sterilised in Peru as part of a massive family planning campaign launched by the President of Peru, Alberto Fujimori.

Twenty years later, these people are still trying to raise their voices and find justice for what happened. The sterilisation programme was mainly imposed on indigenous communities in rural areas. Many of them were forcibly sterilised while others were sterilised without their knowledge while being in the hospital for a different procedure. As the major part of this population was either illiterate or spoke only Quechua, and was often isolated in remote places, they didn’t have access to the media and their testimonies are only now being heard.

The Quipu Project allows these women to tell their stories and make their voices heard as loud as possible through an interactive documentary using a specially-developed telephone line. The word ‘Quipu’ has its origins with the Incas and ancient Andean civilizations, referring to knotted cords that were used to convey complex messages. Similarly to how those ancient cultures used quipus in order to keep records of their oral culture, the Quipu Project is collecting the oral testimonies of those who suffered from the sterilisation programme in order to create a collective memory archive.

Around 150 women have already shared their stories, using a free telephone number provided by the project, describing the horrible experience, the emotional and psychological trauma and the physical pain that they are still going through. Many of them were abandoned by their families or they were stigmatized in their communities. Here’s an excerpt from one of the testimonies:

“We have been fighting because of this for years. We feel ill. We don’t have support from anyone. There is nothing for us. Some of us mothers have been damaged by this treatment. We can’t work… It’s like we are useless. I’m really not well. I have a lot of pain in my body… I would like to be heard at a national level, all over the world, everywhere, by all the mothers.”

Although the sterilisation project was launched as the Voluntary Surgical Contraception, the operations were often conducted without the women’s consent and under unsanitary conditions.

“ They kept us imprisoned, they closed the gates and when we saw how other ladies were crying with pain, we wanted to leave but they wouldn’t let us go out”, says one of the testimonies today.

This extraordinary experiment is still growing and evolving, with more women participating actively using the free-to-call telephone line and sharing their personal stories. Meanwhile, the project has gained global attention and support with presentations in more than 81 countries, and showcases in various festivals, such as iDocs 2016 in Bristol, Censurados Film Fest in Lima and Steamer Salon in Tel Aviv, as well as the day that Sounds and Colours organised in London as part of the Movimientos 10 Weekender. For the International Women’s Day, Quipu prepared the following special video:

The Quipu Project has enabled these marginalised and isolated communities to tell their stories and raise awareness about the illegal sterilisations in Peru in the 1990s. Through this innovative and creative website, everyone can have access to the oral testimonies of those women and support their struggle for justice.

The interactive documentary is available here: