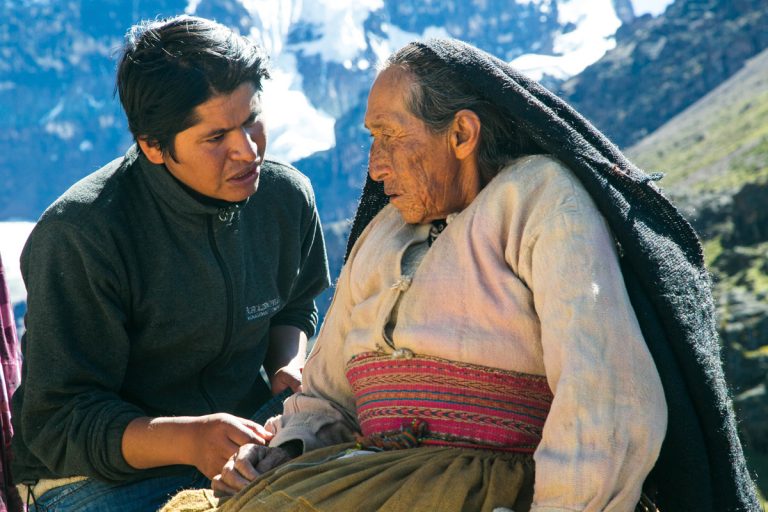 Óscar Catacora’s Aymara-language feature, Wiñaypacha, has been chosen by Peru’s Ministry of Culture to represent the nation at both the US and Spanish Academy Awards in 2019, an astonishing announcement for a country which often makes invisible its indigenous populations in the national media.

An Aymara-speaking grandson living in the city of Puno, Óscar Catacora was well-placed to make a film about generational (and national) abandonment. A family-made film (count the Catacoras in the credits), Wiñaypacha was written and directed by Óscar himself and based on the personal experience of his maternal grandparents whom he’d spend each summer with in the Andes. His paternal grandfather assumed the role of protagonist and his brother produced the film.

Catacora required that his whole crew spoke Aymara in order to communicate with the two first-time actors — the only spoken roles in the entire feature, neither of whom had seen a film before taking part. The crew were faced with difficulties: filming at over 5,000 metres of elevation, with mining bombs exploding in the surrounding mountains of Puno, and traversing traditional barriers of respect in directing two elders. The unique production and method raises Wiñaypacha head and shoulders above indigenista films from often ill-equipped directors.

The film’s message and its cinematography rule. Indigenista pity and wonder are replaced by respect and swerving emotion. The brutal injustices laid out on screen set Wiñaypacha apart from other films of its kind (not that there are many). At once intimate and anthropological, there is as much weight in the symbolic and moving plot line as there is in the detail of an Andean way of life. Wiñaypacha becomes a document of hard work, of carefully honed cultural skills. The landscape is a lead character in its own rite. Its cycles, although unpredictable and often unrelenting, are beautiful. Ice melts, clouds clear and morph and the constant mountains are revered parents and ancestors.

The two characters, Aymara couple Phaxi and Willka (‘Moon’ and ‘Sun’), live together in a stone house 5,000 feet up in the clouds of the Peruvian Andes. They resemble the colour combinations of the ponchos and blankets Phaxi weaves: they must keep in harmony to live side by side. They spend their days working together, tending to their animals, collecting firewood, spinning wool, savouring native potatoes and sauce, and grinding quinoa in the fantastic bright, snowy landscapes of the Andean altiplano. Sound romantic? Despite their dedication to each other, the couple are elderly and alone, thus physical work is a burdened struggle.

‘Where are their neighbours?’, you ask… ‘Their family?’ Willka and Phaxi’s house is set in the mountains far from neighbours and far from town. The only sign of companionship is in the ghostly memory of their son, who is woven into the film through the small woolen jumper Phaxi keeps with her, and the startling dreams that haunt her in sleep — premonitions that their son will return; that, once again a small child, he is crying out for her. But it is not their son who needs them – as his father dejectly affirms, ‘I don’t think he’ll ever return. I think the city has changed our son’ – it is the elderly couple who need him. Watching Willka climb onto the roof to fix a leak, seeing Phaxi’s anxious stare when she realises their final match has been expended, you ask yourself ‘who will help them?’

This is a film about neglect, powerfully shot and written with cunning simplicity. It is political, it is anthropological and it is certainly dramatic. Despite following a conventional structure (chronological beginning, middle and end), Andean concepts are pillars of the film. The twin apacheta rock piles hold the couple’s wishes and desires, symbolic representations of themselves. Throughout the story their hopes fade into the landscape like the sunken wreaths of paper flowers attached to the tall apachetas as offerings in hope of fertility and health. Andean cosmovision is captured in the slow pace of the film with long, wide-angle shots depicting the passing of time in vast, changing landscapes and lives lived within them. The static camera and lack of music forces the spectator to slow down and listen, mirroring an Andean perspective in order to understand the story.

Catacora captivates audiences with near silence, in a language foreign to most but a story rich in empathy and significance. Spanish is heard once, in the term used for a match: ‘fósforo’. A Castilian word for a European invention, the match encapsulates a precarious western concept: of fast pace, of efficiency over sufficiency, and ultimately of dependency. The couple’s life takes a turn for the worst after Phaxi deplores Willka to journey to the city in search of matches. “I’m afraid of town. It’s too far. What if I can’t come back?”, Willka distresses in simple language laden with significance. And as they chase the match, despite their resilience, the prophecy is fulfilled and their demise has begun.

Wiñaypacha portrays an Andean perspective. The only competing world-view is contained in the memory of the absent son who abandoned his family for the city, or in the allusion to destruction and dependency in the match. This is a national film, winning the Concurso de Largometrajes Regionales in 2013, before winning at the Guadalajara Film Festival and now being chosen to represent the nation at the Oscars. It has not been made for international audiences. Yet its success may have something to do with this: Catacora pinpoints two key universal fears magnified by indigenous shame and neglect of the elderly: the fear of becoming too old to look after ourselves, and of living, and dying, alone.

Watch the trailer for Wiñaypacha below: