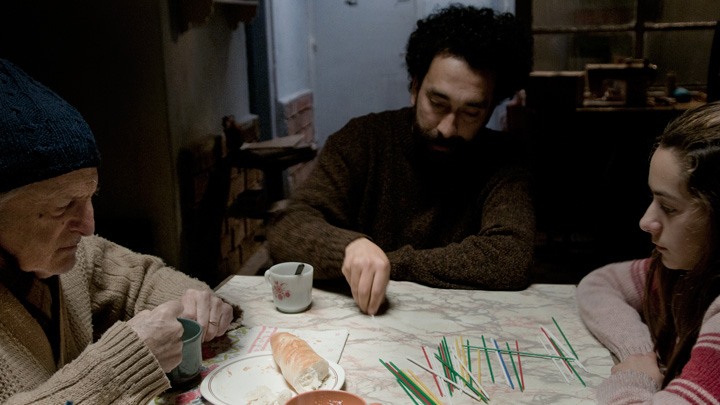 Old age is an issue which will affect us all at some point. Most of us still have a fair bit of time to prepare for its onset. In the meantime however, we’ll have to come to terms with its effects on our loved ones and the pressures involved. La Demora is a film which tries to explore the tensions in the relationship between an ageing father and his devoted, but flawed, daughter who succumbs to a very cruel, but very human wobble.

The film quickly establishes the nature of María’s juggling act as a single mother. Her father, Augustín needs help washing, even though at the moment, he can just about perform some of it himself; the youngest two of her kids noisily fight over nothing while María tries to ready them for school; and the eldest child has reached the age where she is self-conscious about her mum not giving her school trip money on time. As is common among the elderly, Augustín still clings to some semblance of self sufficiency and is in denial about the extent of his dementia. Maria notices him spoon an extra load of sugar into his mate: “I know, I like it that way,” he uncomfortably asserts. Later on that day while he is left unsupervised, Augustín wanders off into town to get some bread and gets himself slightly confused and lost trying to find where he used to live.

María’s income comes from freelance work sewing the detail onto denim pockets. The fragility of this position is made clear when she overhears a conversation while at the factory delivering a completed shipment. Some of the permanent staff complain about their working conditions and one suggests a strike, only for the other to berate the temp workers for never bothering to join in any union activity and being happy to scab for double wages. As she storms out, María sets them straight about her lack of holiday pay, health insurance and job security – even though she’s been doing the same work for five years running.

Maria’s lack of support is further underlined when she tries to apply for a state funded nursing home. She is told that they are usually reserved for those even worse off than her, and with parents who are more ill and more precariously housed than Augustín, who sleeps on the sofa while the rest of the family share the one other room.

Despite all of María’s running around, she is not depicted as a saint. She has a limited temper and can even be rude and insensitive, occasionally talking about Augustín as if he isn’t there, can’t hear or can’t understand: “No more trouble out of him or we’ll have to put a cowbell round his neck.” We are left to decide if the words bounce off or if they hurt. There are enduring shots of Augustín’s old face wrinkled with conflicting emotions, with little to no soundtrack to point our emotions in a specific direction. Augustín probably isn’t quite sure how he feels himself, and it is great that he is played by a first time actor – like the rest of the cast beside María (Roxana Blanco) – to really play on that ambiguity.

This film will invite comparisons to Michael Haneke’s Amour, due to the relative lack of other famous geriatrically-themed movies to compare it to; but despite also featuring grandparents, the films take different ideas as their focal points. Amour involves the love between old people being tested by ill health and questions surrounding euthanasia, delivered in a way designed to shock, discomfort and unease. Maybe you could say that Haneke has run out of taboos to muck around with but the fact is that these issues are becoming more prevalent in an ageing population and aren’t going to be solved in a hurry.

Rodrigo Plá (also the director of the acclaimed La Zona) has summed up the film by saying that it explores something called an ‘emotional accident’ but the film is interesting and worth watching for even more than that.

Even though it is truly heartbreaking to see a sweet old man confused, hope is continuously restored by the number of ordinary people who are happy to go out of their way to help, and who cleverly manage to do so in a way which neither patronises him nor makes him feel like a burden. La Demora’s mix of brutal seriousness with more simple human interactions makes it a great addition to Uruguayan cinema.

La Demora is showing on 15th and 19th March as part of the ¡Viva! 19th Spanish and Latin American Film Festival in Manchester.