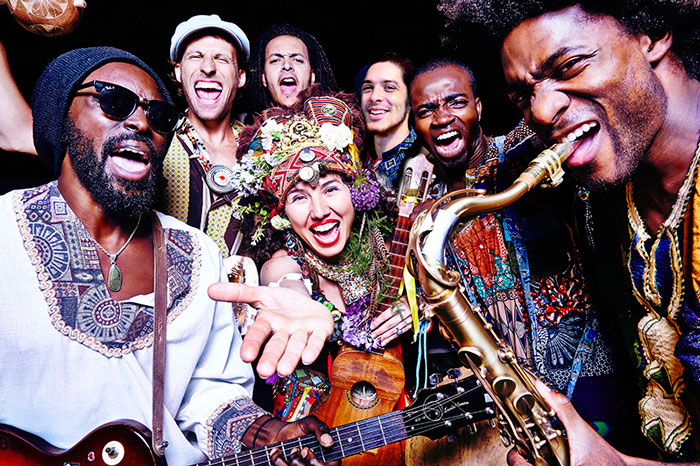 Family Atlantica completely floored us when they released their debut album a few years ago. Named simply Family Atlantica it was a rhythmic, poetic and slightly cosmic journey across the Atlantic, from Venezuela to the UK, on to West Africa and then back again, with stops in Cuba and Ethiopia along the way. Quite simply, it was a gorgeous record, one you could get lost in for days at a time.

After wowing all in the interim with exuberant festival appearances and live shows the group are back for their second album which, as the first, will be released by Soundway Records. The group still comprises a core trio of British musician Jack Yglesias, Venezuelan singer Luzmira Zerpa and Nigerian/Ghanaian percussionist Kwame Crentsil, but they are joined by Adrian Owusu on guitar as well as special guests Marshall Allen from The Sun Ra Arkestra on alto saxophone and Nigerian afrobeat heavyweight Orlando Julius on tenor sax. The result is their most far-out and heavy music to date.

We are very happy to bring you the première of one of the tracks off their upcoming second album, Cosmic Unity, a heavy languid groove with a strong calypso feel and the always delightful vocals of Zerpa called “La Humanidad.”

Cosmic Unity will be released on May 13th and is available for pre-order (digital/CD/LP) from Soundway Records.