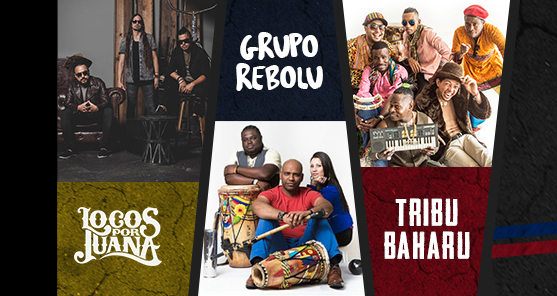 Colombians in New York City long flocked to Flushing Meadows Corona Park in Queens for one of the largest Independence Day celebration in the Northeast until budget woes saw its demise in 2011. Though an Independence Day parade in the Colombian-heavy enclave of Jackson Heights eventually took its place, it doesn’t quite draw the same sized crowds the festival used to, and, as it is a parade as opposed to a festival at a large park, stages with live music are a thing of the past.

The Grammy and Latin Grammy nominated Locos Por Juana is a bilingual Latin jam-band, most notably recognized for their energetic live performance and unique fusion of sounds, which incorporate the beloved sounds of their heritage and upbringing, like cumbia, champeta and afro-Colombian rhythms such as mapale and chande, with American rhythms. The band was formed in Miami, Florida, in 2000.

The band consists of vocalist Itagui Correa, guitarist Mark Kondrat and drummer Javier Delgado, which form the nucleus of the group, joined by trombonist Lasim Richards and percussionist Carlos Palmet.

Their most recent album, Caribe, was released in October 2016, and is a record that includes more English-language songs than any other in their repertoire.

The Bogotá-based Tribu Baharu, whose members all hail from Colombia’s coastal regions, have been a touring machine since the 2015 release of their album, Pa’l Más Exigente Bailador. The afro-champeta music crew is recording a new record, both in the States and in Colombia, but that hasn’t stopped them from the road perfecting their fantastic lively show, which consists of a sparkling Congolese guitar along with high-driven bass and percussion.

Grupo Rebolú is an Afro-Colombian musical ensemble created by childhood friends Ronald Polo, who sings, composes and plays the gaita, and Morris Cañate, a master folkloric percussionist who also plays with M.A.K.U. Soundsystem, and has toured with the likes of Charles King. They’re joined by vocalist and musician Johanna Castaneda. The band aims to promote the rich musical traditions of their ancestors; the afro-descendents of Colombia’s caribbean coast.

Their most current album, Next Stop, was released in 2015.

Another Colombian Day Independence day concert takes place the 21st of July, at New York’s Bryant Park, featuring Gregorio Uribe. The concert is open to the public and is free.