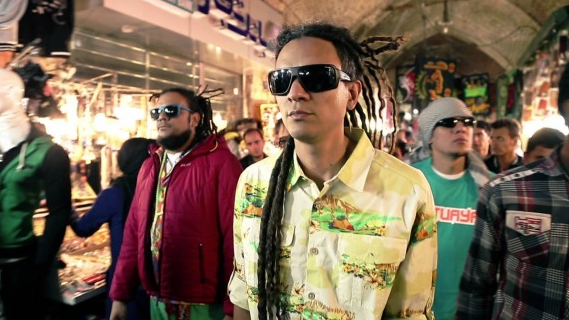 An electrocaribe group from Venezuela has recorded a music video in the Republic of Iran, and they dedicated its song to the Islamic country’s culture.

Bituaya, who hail from Caracas, is a quartet that blends electronic sounds with Afro-Caribbean rhythms, such as cumbia, along with hip-hop and reggae.

The video for “Solos” is intended to reflect the relations between Venezuela and the Islamic country, says singer-songwriter and composer, Piki Figueroa.

“This is the first time a Venezuelan band performed an audiovisual production in this country and the idea was to show how our countries are linked,” he said.

Figueroa explained that the idea for the video emerged during an October 2013 tour in Iran, a country is which is seemingly always in the international political spotlight. While in the capital city of Tehran, they took three days to shoot with Iranian director, Mokarrami Hosein.

“In the song talk about how we feel alone, but we’re really not, because we have our family, our talent, and our country. And we realized that Venezuela is not alone because of the support of other countries, like Iran,” he said.

“It created an impact for us and for them, because we had the opportunity to share our cultures,” Rengifo said.

“Solos” features Venezuelan reggae artist, Baroni One Time, though he did not appear in the video. The song will be on a forthcoming album, the band’s second, which they hope to drop in March. Watch the video below and follow the band on Facebook.