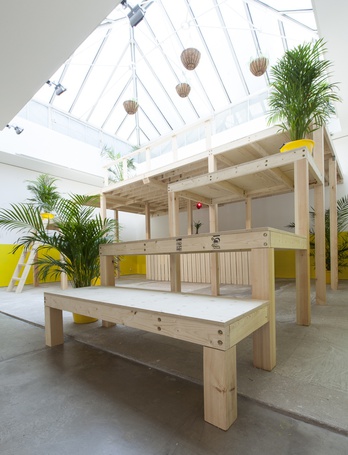 Brightly coloured bikinis, boxers and socks hang from hurricane-proof window shutters and sit right alongside tropical plants growing from football plant-pots in Radames “Juni” Figueroa’s newest exhibition at London’s Edel Assanti gallery. The tropical, yet sparse and minimalist feel of the exhibition space contrasts with it’s northern European backdrop, and this playful presentation of Puerto-Rican-ness bring ideas about identity, stereotype and non-European worlds to the table.

Based in San Jose, Figueroa has exhibited in Peru, Guatemala and the the US amongst other countries, and his work is here for the second time in London. His most recent project in Naguabo, Puerto Rico Tree House – Casa Club consists of a wooden and found material structure, camouflaged into the surrounding tropical forest, and serves as a place to meet or celebrate for locals and visitors. This idea of social space is brought to this London exhibition in the form of a two storey light wooden ‘tree house’ which looks a bit more like a beach bar adorned with lights and hanging plants. The second storey allows the viewer a new perspective on the rest of Figueroa’s work spread out below and in the coming months this space will be used as intended, with plans for poetry readings, DJs and mini exhibition events in the making, bringing the social and participatory aspect of Figueroa’s work to life and subverting the traditional notions of gallery space.

Football and basketball plant-pots create a visually striking reference to the power of the natural world in Puerto Rico, with the plants taking over the shell-like structure of the glossy sports balls. The idea itself seems to present the overwhelming strength of the landscape, that by far surpasses the man-made world of an art gallery. Nevertheless, by elevating these ‘ready-mades’ onto little white shelves in the gallery space, Figueroa creates a contrast between the man-made habitat and the plants that create a home for themselves wherever they can, somewhat diminishing their power.

The phrase ‘Dreams Become True’ written on a backdrop of palm tree leaves against the sky becomes tongue-in-cheek as everyday objects such as clothing and shutters force stereotypes and versions of reality to come together. Both criticism and humour can be drawn from this juxtaposition, forcing the viewer to confront their own stereotypical ideas, yet also to celebrate them. The care and detail shown in Figueroa’s arrangement of the exhibition space mirrors the detail and specificity of everyday life, but also presents a carefully crafted image and ‘feel’ which is totally removed from the natural world. It is this ability to use different elements sparsely and carefully, as if picking the purest essential objects necessary to set the scene, that makes Figueroa’s work so impressive, and it is the playful yet almost taunting visual language that makes it so enjoyable.