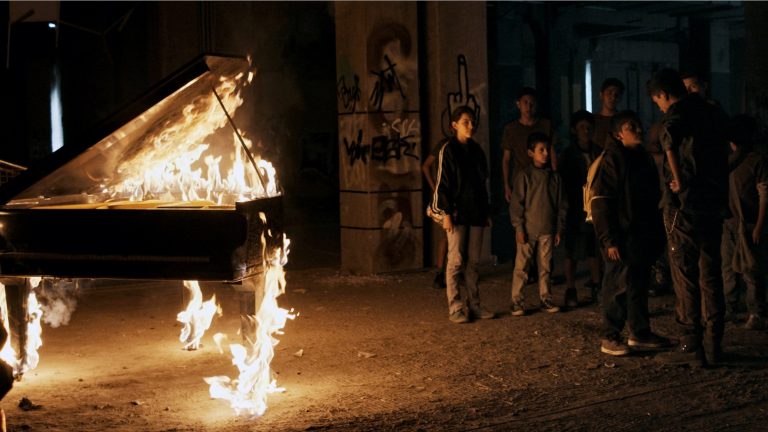 Fantasy and humanity in ‘Tigers Are Not Afraid’

Once upon a time, there was a prince who wanted to be a tiger: tigers are hunters; their eyes can see in the dark; tigers are not afraid. But the prince couldn’t be a tiger, because he’d forgotten how to be a prince. You see, we forget that we are princes, warriors, tigers, when things from outside come to get us. This is the fairytale that young Estrella invents in class in the opening moments of Mexican film, Tigers Are Not Afraid, and it is the fairytale she lives out as the film progresses.

When a gang shootout erupts in Estrella’s school, her teacher desperately hands her three sticks of chalk, with which she can make three wishes. Classes are suspended for the foreseeable future and Estrella is sent home, but her mum doesn’t return that evening. This dark, realist tale is thus unwillingly written by Estrella and the chalk wishes she’ll make throughout her quest to find her mother.

Director Issa López weaves fantasy elements into a real-life context of all-pervading horror: the so-called ‘drug war’ in Mexico and the children that have been left behind by the 160,000 killed and more than 53,000 disappeared since 2006. In her quest, Estrella joins a gang of ‘lost boys’ orphaned by the violence. Demons follow the destitute children, who are left to play with stolen mobile phones, torches and their wild imaginations.

Supernatural animations are laid over realist, often handheld camera shots, and there is a focus on ambient sounds (insects’ wings, gunshots, vehicles, thunder, tinnitus and cockerels), rather than music, although the minimal soundtrack does contain moments of melancholy piano chords.

The fantasy elements give life both to the children’s bright ideals (a house with a zoo, a swimming pool and a football pitch), and their darkest fears (finding a parent’s body chopped up in a bag). This combination of fantasy with realism makes clear that we are experiencing a legitimate tale, told through suffering children’s eyes.

Despite the supernatural elements, we are constantly reminded that fantasy doesn’t equal utopia. There is power in Estrella’s sticks of chalk, but every time she makes a wish, something bad happens. Machismo runs through the film and influences the kids despite their young age. They are well aware of rape, murder and torture and mix these acts into their own fairtyale narratives.

Shine, the young leader of the gang tells a ghost story to help little Morrito sleep. There’s a tiger who’s escaped his cage, only to be hunted by the Huascas. Left hungry, he feeds on children who have no parents. It’s an embellished telling of their own reality, reflecting their imaginative (but not unfounded) fears of what the sadistic Huascas – the gang who’ve razed their town to the ground and likely killed all of their parents – will do to them. Especially given the local politician, whose face is plastered all over the empty town and on TV, is himself a drug lord, and local police are of course as corrupt as the rest.

“They’re confronting a monster that the adults can’t take on,” López told Erick Estrada. When broaching the social crisis in Mexico, López says, “We talk about the disappeared, the deaths, the violence… but no one is asking about their children – where are the kids and what’s happening to them?”

As we are told in the film’s opening titles, there are no figures for the children whom the dead and the missing have left behind, and entire areas of some cities are turning into ghost towns. Children are left to look after each other, as told through Pop nagging Tucsi to ‘eat his greens’ – the dried peas in his stolen pot noodle – or Shine drawing a tiger – ‘Not a kitty!’ – for Estrella’s protection.

López manages to direct the child actors well, with many impressive and believable moments, even if it takes them a while for them to warm up. And she’s received international praise for it. Stephen King and Guillermo del Torro have publicly commended López’ first dive into fantasy and horror, saying they were “under its spell” and found it “innovative, compassionate and mesmerising”, respectively. But Lopez, who is an established screenwriter and director, is most known for her whitewashed Mexican chick flicks with titles like ‘Valentina’s Wedding’ and ‘Ladies Night’. This is certainly a step in a different direction.

There are some especially cinematic sets, like the rooftop the lost boys call home, which has self-portraits graffitied onto the foundation walls; hollowed out TV sets serving as beds and old dolls, spray paint and Morroito’s tiger teddy providing entertainment. There are bold, impressive shots, full of real horror, wonder and metaphor, like the grand piano burning in an empty car park, the abandoned mansion with exotic fish surviving in a puddle next to the shards of their broken tank – and the final scene, which is both chilling and majestic.

These shots hold the film together, as overall, it lacks some lustre and tension. On the one hand, this impedes you from indulging in the fantastical, to be swept into another world. On the other, this is an important reminder that the story is not far from the cold truth. This is magical realism in its truest sense.

As the fairytale goes, from wanting to become tigers – strong, vicious and unafraid – we forget that we are princes. Victims of the drug war, whichever role they play, are lost souls who have forgotten their worth while trying to protect themselves amidst the horror. López and her characters, through rekindling our imagination, remind us of our humanity.

Tigers Are Not Afraid is available in the UK on Blu-ray, DVD and Amazon Prime from 23rd August.