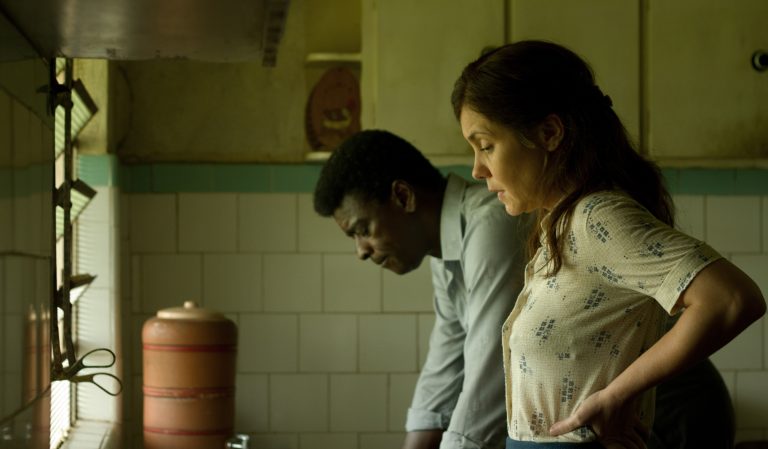 A still from Marighella

Marighella is an eye-opening historical biopic that is not for the faint of heart. In his directorial debut, Elite Squad and Narcos star Wagner Moura steps behind the camera to present an emotive and provocative portrait of Afro-Brazilian writer and politician Carlos Marighella – a force de resistance against the 1960s military dictatorship and an inspirational icon for revolutionaries across the globe.

Set in 1969, the film provides a rousing and intense cinematic depiction of Brazil’s US-backed military dictatorship and a graphic reminder of the violent atrocities that took place during this dark chapter of Brazil’s history. The film couldn’t be more pressing in light of the divided political climate in Brazil with leftist president Luiz Inacio Lula da Silva recently beating the incumbent far-right former army captain Jair Bolsonaro in an extremely tight election – in the second round of voting da Silva took 50.9% of votes, to Bolsonaro’s 49.1%. Populist president Jair Bolsonaro had repeatedly spoke fondly of the country’s military regime during his time in power, defending torture and infamously saying that “the only mistake of the [Brazilian] dictatorship was torturing and not killing”.

As Brazil swung to the right following Bolsonaro’s move to power in 2018, conservatives and Bolsonaro supporters have increasingly tried to paint a different picture than the bloody and violent truth that plagued their own history of oppression. They have argued that the military rulers oversaw a period of growth, where “good people” could safely walk the streets and only “terrorists” or “criminals” were punished. According to the film, the 1964 military coup was justified by its proponents as a means to “end corruption and stop the ‘communist threat’”.

As the film demonstrates, the protagonist Carlos Maranghilla was perceived as the biggest “terrorist” of them all. Facing a violent dictatorship and with little support from an intimidated opposition on the left, Marighella, played by actor and musician Seu Jorge, renowned for his role in City of God, organizes a resistance movement known as the Ação Libertadora National (ALN) – that later became the most influential armed organization in the resistance.

This daring film, which has undergone domestic censorship, provides valuable insight into a chapter of Brazil’s past that is often misunderstood. It tells the audience how Marighella’s resistance movement gained support from young students who found the courage to challenge the authoritarian police state and fight at a time when no one else dared. “The resistance rallied the self-employed, farmers, religious leaders, artists, intellectuals, unionists, rebellious military, and especially students”, says the film’s captions.

Though in history Carlos Marighella is a controversial figure, in the film he is portrayed as a heroic, fearless figure and Marxist martyr who is not afraid to take up arms, spread his revolutionary rhetoric across the country, and stand up to the dirty regime that is laid bare in the film. The opening scenes set in São Paulo thrust the audience into action. Beginning with a breathless, Robin-hood style hijack of a train carrying weapons, the audience quickly learns that this is to be a film where his revolutionary cell is fighting the darkness. This is a powerful opening hook, which is then dramatically contrasted with a scene that rewinds from 1968 to 1984 in Rio de Janeiro, soon after the end of the military coup.

Set against the beautiful backdrop of Copacabana beach, we see a different side of Marighella, portrayed as a caring family man who teaches his son to be fearless of the water – a life lesson that embodies Marighella’s daring approach towards the oppressive military regime and how far he is willing to go to secure a brighter future for his family and country.

Soon afterward, Marighella is cornered in a cinema and shot in the presence of children before behind hurled in the back of a police car and arrested. This powerful scene is one of the most iconic moments of a real-life version of his life story, in which he yelled “Down with the fascist military dictatorship! Long live democracy! Long live the Communist Party!”. On-screen, however, this is merely limited to “Long live democracy!”.

In the film, due to legal pressure, Marighella is released from prison but what the film fails to show is that any person who was involved in politics in any form, risked being jailed, tortured, and killed. The film simply indicates that Marighella and his comrades who rob banks and hijack trains are merely subject to these conditions. Despite being shot at and arrested, far from intimidating his cause, it only provides the impetus for Marighella and his young comrades to step up their fight, adopting a “tit for tat” approach towards the police’s aggressive stance: confronting the violence with violence of their own.

But a string of hurdles and tragedies complicate their cause as they are faced with infamous censorship of the press and a lack of popular support for their movement. It’s indeed these tragedies that spotlight the true violent atrocities that occurred at the hands of the police in the 1960s.

In a cat and mouse chase, Carlos Marighella’s nemesis is the sadistic police officer Lucio played by Bruno Gagliasso on the revolutionists’ trail. On the course of their hunt for Marighella, the film depicts graphic, gory scenes of shootouts and torture, where Marighella’s accomplices were subjected to electric shocks to their feet and were forced into the pau de arara, or parrot’s perch, in which one of his comrades was suspended upside down naked, from a stick, with bound wrists and ankles. In fact, it was this painful past that former leftist Brazilian president Dilma Rouseff, a former urban guerilla member was subjected to in the 1960s.

The film’s director, Wagner Moura, has publicly voiced his disregard for Bolsonaro and in many ways, the film can be perceived as his response to Bolsonaro’s 2018 electoral victory. As such, the film can be seen as a reinforcement of the Brazilian left’s ideology and a call to take action against the authoritarian far-right. As such, the most pressing question to be asked is: “Does Brazil really need a film that openly advocates armed confrontation against its ultra-conservative far-right government?”. Perhaps not. But if you take the film as a drama-filled, one-dimensional, action-packed, adrenaline-filled shoot-out where Marighella’s daring approach towards authoritarianism can act as inspiration for the left, then it works fine.

This is most unambiguously shown at the moment one of Marighella’s comrades, hanging from the parrot’s perch hears, of Marighella’s death: “Your boss is dead, you have lost”. To which he replies: “No, you have”.

Marighella is now available to stream on Amazon Prime.