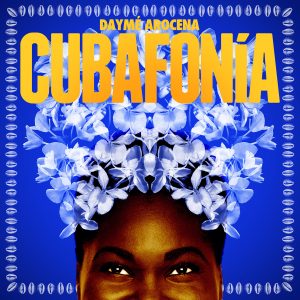 Despite Daymé Arocena reaching international audiences and receiving high acclaim, her music hasn’t stopped growing. She has seemingly embraced the not small responsibility of performing a mixture of her Cuban roots heritage with the jazz education and experience that she has gained over the years. Cubafonía, her latest album on the Brownswood label, has given her the space needed to mature, following on from her previous electronic-driven remix projects. On this album Arocena gets to show how her vocals can flow over a masterfully conducted orchestral music.

Arocena extends an idiomatic duality, that sees her sing in Spanish and English, to the idiosyncrasies that surround the songs, mixing Latin genres such as son cubano and pop-infused bolero experiments with jazz and power ballad structures. For those familiar with 2015’s Nueva Era, it’s fair to say that this album follows a more upbeat direction, with tropical rhythms on many of the pieces, offering a joyful experience, especially for those who like to swing their hips while listening to Caribbean music.

Opener “Eleggua” is are dramatic adventure in Cuban music, an invocation to the Yoruba gods that is fuelled with energetic and prominent brass sections. The title of “La Rumba Me Llamo Yo” means “rumba is my name”, and is no understatement, with crazy piano moments that recall the classic Fania Records family sound. Effectively enough, “Negra Caridad” plays around with more Latin American sounds, taking elements from cumbia for its steady bass-line, while “Mambo Na’ Má” mixes the New Orleans signature band style with, of course, Cuban mambo, giving a worldwide jazz fusion rendition.

The album may be called Cubafonía, but this is more an exercise in making music with a global view, not allowing it to get confused by trying to put everything into the mix, just letting it flow naturally through diasporadic afro-Latin references that will put a smile on your face (unless you are listening to the emotional devotion song “Todo Por Amor”). If you didn’t know Daymé but love the passion of Omara Portuondo or the cutting edge rhythms of Mongo Santamaría, you will find here a favourite new artist.

Cubafonía is available on Amazon UK, Amazon US, iTunes and Bandcamp.