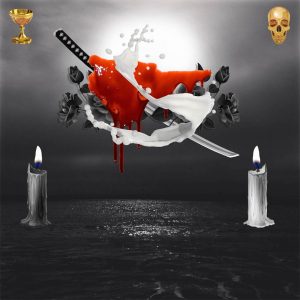 Throughout the history of Terror Negro records, they have always adopted an obscure approach to tropical bass music, whether through the militant dub of Loko Bono, or the piracy inspired mash-ups of Tribilin Sound. Now the main man behind one of Peru’s most iconic underground labels, Deltatron, unveils what must be the most polished version of their aesthetically-dark musical creation.

Previously released single, “Ego Trip”, functions as the title for the album, but it also gives meaning to this whole project. Ego Trip is full of insomniac introspection by complex night creatures, Deltatron being chief among them, as well as many other partners in crime. Ranging from different origins, these are natural collaborations born either in the clubs or digitally, with contributions from Lao, Turbo Sonidero and DJ Kriziz from Mexico, Principe Q and Dave Nada from the States, Siruki from Bolivia and Alpha S from Chile.

The music is a well-blended hybrid of dembow, trap, cumbia and bass music, with most of the tracks certified bangers that confirm Deltatron as one of the most representative artists of Peru’s electronic music scene. His dance floor burning skills have him touring regularly through the Americas, so it’s no surprise that the album possesses a very sultry club vibe.

On “Revienta El Sistema” you get a powerful anthem that could either be telling you to blow up your speakers or incite a riot. “Reyes Del Sabor”, made with Turbo Sonidero, gets all that deep cumbia rebajada style from the contemporary sonidero culture, but also grabs a couple of elements from trap and future bass. The Alpha S-assisted track is a beautiful combination of the signature elements of both artists, taking the experimental, hectic drums of the Discos Pegaos representative to new heights with Deltatron’s darker melodic synth skills that sometimes reminds me of that classic NAAFI sound.

Some of these tracks were premiered by renowned media around the world, with XLR8R, The FADER and Remezcla giving praise to an album that is reaffirming that club music in Latin America must find its own path. Using traditional and contemporary local genres like cumbia and dembow, taking elements of the ghetto sounds from the big metropolitan hubs of the world, like trap and future bass, Deltatron is doing just that. He’s building his own identity, but also giving a call that if you want to stand out in the crowd, you need to understand your foundations.

Ego Trip is now available from iTunes, Amazon UK and Amazon US.