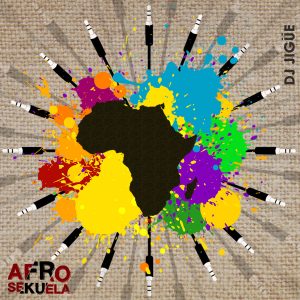 Chopping between foot-stomping bass, Angolan kuduro and even a sample from Sugarhill Gang’s “Rapper’s Delight”, the new EP from Cuban producer DJ Jigüe packs a lot into just a handful of songs.

Afrosekuela offers three distinct tracks. The EP begins with the hip-hop-inspired, electronic “Ponte de Pie” and then the futuristic instrumental “Afrosekuela”, with its nods to African roots in Caribbean lands. The third number is “Bateria Perfecta”, which certainly lives up to its name with a whole gamut of beats unleashed from the get-go. Layers and samples from whistles to bongos are added as the music grows in strength throughout and it is arguably the number with the most depth out of the three.

DJ Jigüe has not just been working on his own EP. He has also been writing, producing and performing on ¡Súbelo, Cuba!, the new release from Havana Cultura, the collaborative project from British DJ Gilles Peterson and the rum brand Havana Club.

There are some high points amongst his contributions, notably “Enciéndelo”, on which Cuban percussionist Yissy García’s drumming feels almost military as it backs DJ Jigüe’s echoing call-to-arms for “Cuba, the diaspora… my people, the youth, revolution in the heart of love – fire it up! Open it up! Listen to it!”

There are other less convincing tracks, such as “Compañeros Tropicales”, which is served straight-up with little variety. He co-wrote and co-produced “Afrocubismo” and “Traketeo” and also pops up on the final farewell number, the short but sashaying ‘Hasta Pronto’.

In addition to Afrosekuela and ¡Súbelo, Cuba!, DJ Jigüe has released Old Cuba New Cuba Vol. 2, described as “reimagined and remixed tracks from Cuba’s past, for Cuba’s future”.

These two fantastic numbers offer different experiences for the listener. “Anabacoa Remix” calls to mind the ensemble performances of the island’s rumba, guaguancó and salsa, with a simple modern beat pulsed through the middle.

“Nostalgia Cubana Remix” is a beautiful track, with a soulful brass breeze winding pensively through the middle, leading into blurred and wistful vocals. Added to the backing drum sample, this makes for a powerful track, expertly balancing the nostalgia of past genres and the modernity of future beats.

Afrosekuela and Old Cuba New Cuba Vol. 2 are short, snappy releases that have more in common, with their fresh electronic beats interspersed with notes on history and nostalgia. DJ Jigüe‘s contributions to ¡Súbelo, Cuba! feel slightly more mainstream as he works with other established Cuban artists. His songs on the compilation album still linger with power and variety, but the rawness of the two online releases does more to captivate the listener.