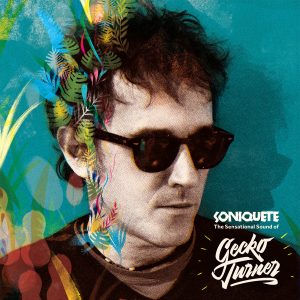 Every now and then an album comes along that’s really difficult to pin down. I’m thinking, for example, of jazz trumpeter Olu Dara’s marvellous confection of blues, soul, folk, spoken word, hip-hop and jazz, In The World: From Natchez to New York. Cue from out of an Iberian left field… would-be beatnik, Gecko Turner, clutching a Kerouac novel and listening to Dizzy Gillespie on his headphones. The splendid Soniquete is a compilation of Senõr Turner’s previous four albums for the Spanish Lovemonk label, so there’s ample scope for variety. This native of distant Extremadura near Spain’s border with Portugal runs such a gamut of styles that it’s a bit like one of those Christmas selection stockings that Santa delivers to chocaholic children. There’s some soft-centred soul, some chunky Afrobeat, a few Latin concoctions and more funk than you can devour in one sitting. One might suspect the man of showing off were it not all done with such wit and idiosyncratic style.

A case in point is Turner’s debut single from 2003, “Un Limón En La Cabeza”. Nudged by some Brazilian percussion and a Gillespian muted trumpet, the band soon slides into an insinuating groove over which Turner incants some catchy nonsense about putting “a little lemon on your head”. On several of the choicest cuts here – the deliciously melodic “Little Sonny”, the indolently swinging “Pal Perú” and the surely Curtis-inspired “Fess It Girl” – he effects the kind of so-laid-back-it-nearly-gets-left-behind groove that Sly sealed in stone on “A Family Affair”. Whether he sings in Spanish, Portuguese, English or any old lingo he dreams up, it really doesn’t matter. The title Soniquete is a word often used in flamenco, apparently, to refer to the rhythm and sound. Turner seems to have no particular message or theme, but clearly just revels in the diversity of musical sounds.

Hardly surprising, perhaps, given the long list of his influences: everyone from The Kinks to the Velvet Underground via Dizzy and James Brown. Back in the ’90s, his first group, Perroflauta, played a mix of African rhythms, jazz, soul, reggae and samba. Around this time, he was inducted into the Latin American musical community in Madrid by the Brazilian percussionist, Rubem Dantas. In 2003, his first solo album, Guapapasea!, revealed a facility for the Afrobeat to which he was introduced by his bass player, Alvaro “Dr. Robelto” Fernández (as evidenced here by the title track and “Afrobeatnik”). Released to much acclaim in the US, it was followed in 2006 by Chandalismo Ilustrado, which again featured Brazilian trumpeter Irapoan Freire, as well as guitarist Edu Nascimento, British singer Eska (heard to fine effect on “Moncabio Blues”) and Cubian pianist Javier “Caramelo” Masó, heard on the Afro-Cuban-flavoured “Toda Mojaita”.

Recorded in the US and London, his third album, Gone Down South (2010), introduced to the mix the kind of sub-Saharan sounds heard on “Mbira Bira” (Turner’s Stella Chiweshe moment). Back in Extremadura, he recorded his fourth album in 2015, That Place By The Thing With The Cool Name.

I can’t quite decide whether Gecko Turner is a very talented musical magpie cum myna bird or a genuine original. With every listen, ever more apparitions bubble to the surface: a clone of Amp Fiddler on “Little Sonny”, the Michael Franti-c “Here Comes Friday”, the War-like sounds of “Ámane, Mìmane”, the Stevie Wondrous clavinet funk of “When I Woke Up” and “Cortando Bajito”, the Marcos Valle groove of “I’ll Do That”. But with every listen, I like it more. Even if I never make up my mind about Gecko Turner, I’m inspired to explore his back catalogue while I enjoy this introduction for what it is: a rich, rewarding musical coat of many colours.

Soniquete: The Sensational Sound of Gecko Turner is released by Lovemonk and available on Bandcamp.