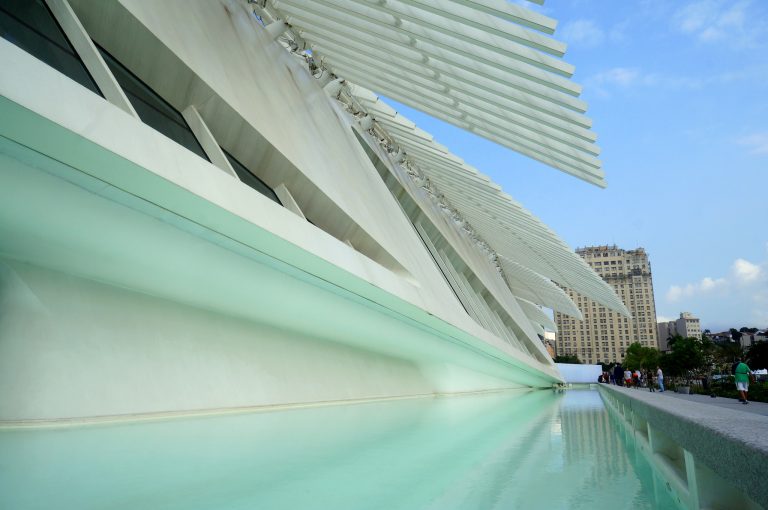 Museums have long-since been thought of as ‘quiet’ places where viewers can experience exhibits using only their eyes. Luckily, many museums have been adding hands-on experiences to ensure their exhibits keep up with the changing times.

Check out how some museums have been attracting new visitors and giving old visitors new experiences.

Some museums ask visitors to immerse themselves in their exhibits. Imagine travelling to another land or even eating food in an exhibit. The Tenement Museum on Manhattan’s Lower East Side asks visitors to imagine living in an urban slum at the turn of the century.

Rio de Janeiro’s Museu do Amanhã (Museum of Tomorrow) focuses on ideas rather than objects. It is also one of the most modern looking museums on the world (see image at top), with a structure that looks like a cross between a solar-powered dinosaur and a giant air conditioning unit.

Hollywood isn’t the only industry that employs technological advances to reach thoughtful minds. The Metropolitan Museum of Art in New York City often asks artists for video displays. The American Revolution Museum in Yorktown will use a 4D movie to teach visitors about the war that freed America from the British. They will also smell gunfire and feel rumbles in their seats. The World War II Museum in New Orleans also uses a 4D movie that includes live snow and actors.

The Buenos Aires New Contemporary Art Museum held a contest to design their new building. Participants submitted some of the most technologically advanced museums designs ever imaged. Construction of the winning design is underway.

Kids make up a huge group of visitors in museums every year, so it’s important that museums cater to these pint-sized visitors. The Metropolitan Museum of Art lets kids get creative with their own art projects to help them understand more about works within the museum.

The museum also has a kids self-guided tour. It comes complete with colouring activities and questions to help kids understand the meanings behind artworks that normally might head straight over most kids heads. There are many companies out there revolutionising the tour experience, such as Museum Hack, who promise “This isn’t your grandma’s museum tour.”

The Franklin Institute in Philadelphia allows visitors to use virtual reality headsets to experience the flight deck of a space shuttle, monk seals and beaches in far away lands. The best part is that visitors don’t even need to head to Philly to check out these cool exhibits. They can download the video on their smartphones and view through VR viewfinders.

Museums are still trying to find a way to create VR headsets that fit all visitors without gaps or other fitting issues that could affect the quality of the experience.

A historic Colombian hotel outside of Bogotá, Colombia opened its doors as an ecological museum back in 2013 after receiving a $410,000 grant from the European Union to further biodiversity programs. This first of its kind museum it’s known as the Tequendama Falls Museum of Biodiversity and Culture. Rather than traditional Museum exhibits, here you will explore the ecological history of South America and take in some spectacular views of Tequendama Falls’ 515 ft. drop.