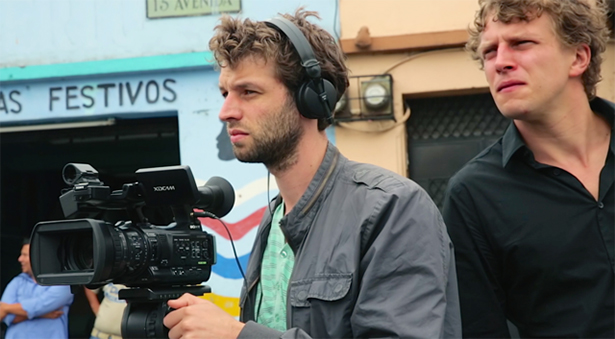 Carrying The Burden: An Interview with ‘Burden of Peace’ Film-makers Joey Boink and Sander Wirken

Burden of Peace (Original Title: Carga de Paz) is an impressive documentary about Attorney General Claudia Paz y Paz’s quest to bring to trial the perpetrators of the Guatemalan genocide. It’s part of the schedule of the Human Rights Watch Film Festival, which is currently taking place in London and Toronto, before later heading to New York and various other cities around the world. I had the chance to speak to the two main creative forces behind the documentary prior to a screening of the film in London.

The first thing one notices about director Joey Boink and researcher Sander Wirkern is the quiet confidence they exude, the quality that defines the Guatemalan Attorney General they have been following for the past four years. This trait is arguably the protagonist of the documentary, the driving force of Claudia Paz y Paz’s quest for justice, and all the more remarkable for its resilience in such a corrupt, chauvinist and above all, violent society.

Boink and Wirken witnessed such violence first-hand while living in Guatemala. They realised the enormity of this issue in a country situated on one of the world’s most infamous drug-trafficking routes, and the burden it carried of its violent past. Hanging over the country is the aftermath of the 46-year Guatemalan civil war and the genocide of the Ixil people which, to this day, is not formally recognised. Although a peace treaty was signed in 1996, marking the end of the fighting, it has done little to put an end to the cycle of violence, and heal the country’s wounds. It was not until Claudia Paz y Paz, with a strong background in human rights, was elected into office in 2010, that Boink and Wirken saw hope of bringing justice to the perpetrators of dictator Efraín Ríos Monfrontt’s genocide.

The idea to follow the resolute Attorney General’s four-year term slowly germinated, but gaining her trust was another issue altogether. Boink, who has a background in political science, had already made a film in Guatemala, but it was arguably Wirken who really swayed her. Currently a PhD student at the University of Amsterdam where he researches violence and organised crime in Colombia and Guatemala, Wirken “speaks the language of law and so she could speak with us on an academic level,” said Boink. The fortuitous coincidence that the pair are from the Netherlands which has a long history of supporting human rights in Guatemala, also tipped things in their favour, and they were granted full access to her office.

The very nature of the society they were trying to document did not make things easy for them. They would get a call telling them the trials were scheduled for two weeks’ time and they would book flights to Guatemala, a second call two days later telling them it was cancelled, and a third one only moments afterwards telling them that the trials would go ahead as planned. Often they were at considerable personal risk; Wirken’s phone was systematically hacked and, while shooting arrest warrants, they were always the only ones present without bulletproof vests. When Claudia’s term was cut short by seven months, she fled to Spain with her family, while Boink and Wirken stayed on for another week. Suddenly, without the 24-hour security they had benefited from, the full impact of the potential danger they were in really hit home.

One of the most striking moments in the film is when businessman Ricardo Mendes Ruiz calls her a “little fatty” and the force of the chauvinism Claudia is targeted with really becomes apparent. “They’ll use anything,” Wirken said, to shame her name. “On the radio they announced that her husband was not the biological father of her son and that she was having sexual relations with co-workers of the public prosecutor’s office. As a woman she doesn’t know what fighting crime means…” “There must be men behind her managing her; she is just a puppet”, Boink adds.

Critics were unwavering in their irrelevant allegations, but perhaps more surprising is their objection to Claudia’s advocacy of human rights. In much of Guatemala, Wirken explains, human rights is a dirty phrase, associated with Marxism and Western ideals and organisations supposedly designed to infiltrate the country. It is partly a case of the government creating an enemy against which it can define itself, but it is also a matter of twisting the benevolent intentions of human rights. “In day to day crime, they would frame human rights as being opposed to death penalty. Then if someone gets killed, and people insist that prisons must be humane, people say the murderers have human rights, but the victims didn’t have human rights. The victim is dead. What are human rights good for? Human rights are the reason that we are in a violent society. It is twisted until it becomes associated with terrorism, obstruction and Marxism”, says Wirken.

It would seem that the ‘eye for an eye’ mentality prevails, which further perpetuates the cycle of violence. Furthermore, while the country’s media is largely under governmental control, has a 26% illiteracy rate, and has many disadvantaged communities without easy access to information, it is easy to manipulate public belief.

Yet in spite of these odds, Claudia remains rigorously committed to her cause. Not only is she unwavering in her quest to bring Monfrontt to trial, but on a broader scale, she is a lone bastion in her battle against corruption. One of her first actions on assuming office was to lower her salary in order to set an example of humility, and acting on behalf of the common good. This was part of her reasoning in allowing Boink’s film crew full access to her office; she has nothing to hide. She was also the first politician the US could completely trust in their war on drugs, after arresting numerous police officials on drug trafficking charges.

Yet with Claudia now exiled in Spain, there is still a long way to go. Wirken has little hope that this case will be brought to trial; “Mont is 87, and the defense attorneys will probably be able to postpone the case until he is physically or mentally unable to appear in court, or dead.” He explains. The film, however, does exude Claudia’s extraordinary determination, and gives hope, not yet of Guatemala decisively bringing closure to such a tragedy, but of the possibility of the country being able to gradually reduce crime and slowly come to terms with its violent past. Claudia Paz y Paz is a truly remarkable individual.

You can read our review of Burden of Peace here.

Find out more about Burden of Peace at the film’s website: burdenofpeace.com. Details of all editions of the Human Rights Watch Film Festival can be found at ff.hrw.org