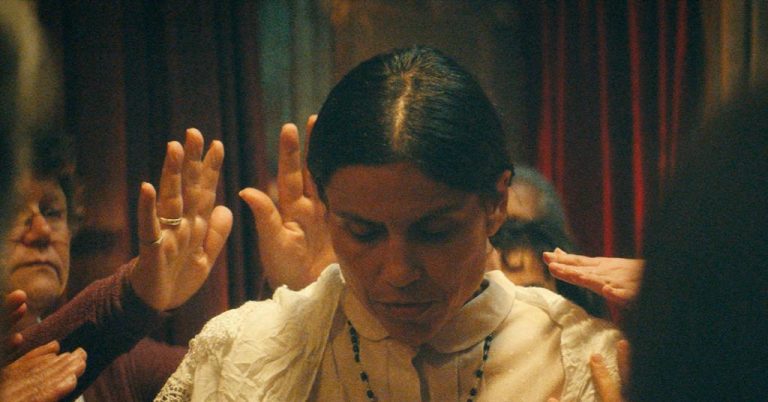 Discovering Self in the Magical Realm of ‘Clara Sola’

Clara Sola takes an imaginative look at a woman’s release from the social constraints that shape her life, through her unique connection to the natural world. Clara, played sensitively by Wendy Chincilla Araya, lives in a rural village in Costa Rica’s mountains and is believed to be a mystic. The conflicts between the confines of her sainthood and forbidden parts of herself escalate through a supernatural and sexual awakening. Blending poetic and thoughtful drama with magic realism, the film follows Clara’s elaborate journey of understanding unexplored parts of herself. Writer and director Nathalie Álvarez Mesén has been praised for the film’s challenge to ideas around repression and prejudice, and with its debut at Cannes Film Festival and UK premiere at the 65th BFI London Film Festival, Clara Sola brings a uniquely tender approach to notions of female oppression in Latin American cinema, to a global stage.

Clara is in her forties and has a form of learning difficulty as well as a physical disability. She is misunderstood by those around her, infantilised because of her solitary and often volatile demeanour. As a dancer and first-time actress, Arya brings an incredible physical element to her performance, portraying Clara’s relationship with her body as beautifully complex.

The film is mesmerising, blurring the line between fact and fiction. Clara’s otherworldly connection to nature adds a mythical element; she communicates with animals, predicts rainstorms and seemingly causes earthquakes. The overwhelming presence of nature in the mountainous landscape location is elevated by the sound design, as recordings of the forest’s trees and birds subtly score the film. Clara cannot connect to reality, forming her most intimate relationship with the natural world.

Clara’s ‘othering’ is perpetuated through her tightly bound social constraints. “Mama says I work for God” she echoes, as her mother washes and dresses her for visitors crammed into their living room seeking healing. Yet Fresia’s characterisation is nuanced, both critiquing her repressive enforcement of traditions rooted in religion, whilst also showing how they are passed down from generations of women, and perhaps difficult to unlearn.

In spite of the structures imposed on her, Clara seeks transformation. Her tale of liberation through embracing pleasure ends in a spellbinding cinematic crescendo. Clara Sola carefully examines belief in this fascinating story of resilience; how the enforcement of belief can be detrimental, but an openness to different forms of belief can lead to a deeper understanding of ourselves.

Clara Sola will be in UK cinemas and on demand from 18th November 2022.