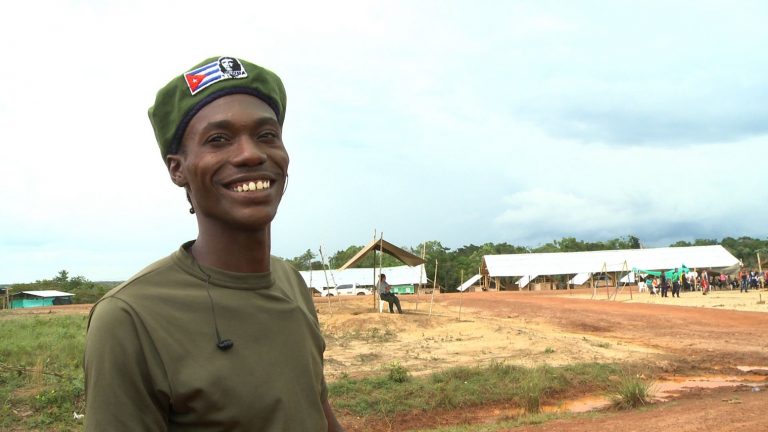 Doc’n Roll Presents ‘Listen to My Song’, A Film About Music and Peace in Colombia

Now in their 5th edition, Doc’n Roll Festival screens compelling music documentary films of all genres to audiences across the UK. The festival, which is taking place in London from the 1st to the 18th of November, will celebrate music subcultures through film and discussion.

Their statement? “Passionate about independent film and music across all genres, we provide our audience with the opportunity to watch these films as they were designed to be watched – LOUD.”

This year, amongst a wealth of hard-hitting and potentially iconic music docs such as Blue Note Records: Beyond the Notes ; Rudeboy: The Story of Trojan Records and Pure Love: The Voice of Ella Fitzgerald, the British-Colombian Listen to My Song will be making its voice heard.

This British-directed independent feature is a politically-fuelled and forward-looking portrait of a Colombian musician, seemingly a firm believer in the bright opportunities which the Colombian Peace Process holds (the sentiments are seemingly mirrored by director, Danny Mitchell). Esteban, musician and long-term FARC member, is spotted by a producer after playing a peace concert. Can he change his life path and enter a whole new career as an unarmed, paid musician?

The concert Esteban is invited to play in Bogota could reshape his career, but first he must make peace with his own past and reconnect with his family in Cali. If he can achieve his dreams, perhaps it’s conceivable that others can also move on, marking Colombia’s liberation from its troubled past.

Find out if love conquers all at Listen To My Song‘s world premiere on Sunday 18th November, Picturehouse Central, London, 6pm. Full details of the screening are here.

The film will be followed by a Q&A with director, Danny Mitchell, who has co-directed Reykjavik Rising (2014) on the “pots and pans revolution” in Iceland and a series of Conscious Collective shorts about UK politics. He returns to the big screen with the story of Esteban, who fled a life of poverty in the ghetto to join Colombia’s FARC guerrillas at 13.