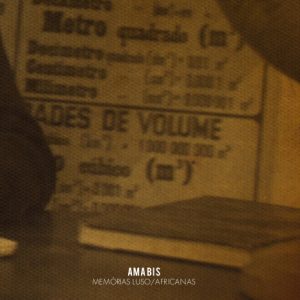 Amabis‘ Memórias Luso/Africanas comes across like a Brazilian Portishead, featuring three of Brazil’s most distinguished vocalists in the shape of Céu, Criolo and Tulipa, atop dense instrumental backing.

Yet, the album begins with “Dois Inimigos”, the only song not featuring one of these esteemed vocalists, Gui Amabis himself handling vocal duties. In truth, it’s also one of the highlights of the album, a track that sounds like Basil Kirchin soundtracking the industrial revolution, which is to say it’s a darkly majestic piece highlighting the fact that this is not going to be an album of light and fluffy MPB.

First guest vocalist is Criolo who half-croons his way through “Orquídea Ruida”, a song that feels half Spaghetti Western, half epic Isaac Hayes soundscape before hitting a Tim Maia soul samba riff for the final 30 seconds.

“Sal E Amar” has the kind of bouncy melody from Tulipa that was so popular on her Efemera debut but it also has an extra muscle in the rhythm section which often reminds of the 60s soul revivalism of Amy Winehouse or Sharon Jones. There is a similar sense of nostalgia to “Ao Mar” which has the playfulness of Rogerio Duprat’s productions for Os Mutantes, and is also one of the most unique and enjoyable tracks on the album.

Céu sings on three tracks on the album, the first two of which feel a little too comfortable, evoking the spirit of her own Vagarosa album (on which Gui Amabis featured) too much and failing to offer anything different. The third of her tracks is the last track on the album and the last of three tracks which highlight the “Africana” part of the title of this album, these three tracks carry the same sense of grandeur and spirituality that Vinicius de Moraes and Baden Powell and more recently Metá-Metá summonned on their respective Afro-Sambas and Metá-Metá albums. The main constant throughout this album is Gui Amabis who provides keyboards, guitar, bass, vocals and production, and who along with the great vocalists (which also number Lucas Santtana and Tiganá) is joined by musicians such as Siba, Curumin, Dengue, Pupillo, Regis Damasceno, Thiago França, Rodrigo Campos, Marcelo Cabral and Samuel Fraga. The disappointing thing is that while they produce some real highlights the album fails to hold together as a piece, with the exception of those last three tracks which ensure the album finishes with aplomb. It’s still very much an album worth listening to for the highs but often leaves you wondering what could have been.