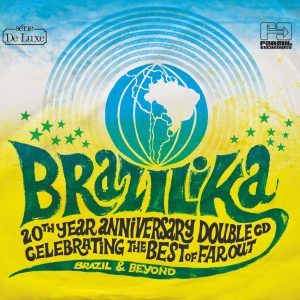 Review Brazilika: 20th Year Anniversary Celebrating The Best Of Far Out Brazil & Beyond

When it comes to understanding the European love for Latin music, Far Out Recordings is one of the keys. The independent record label from the UK has been bringing the finest jazz-infused and bossa nova-rooted Brazilian music to the world since 1994. They have been the home for artists as legendary as Azymuth, Grupo Batuque or Banda Black Rio and have taken super special care of their releases which also include remixes by the likes of 4Hero, Jazzanova, Zero dB and other influential contemporary musical experimentalists.

Brazilika is the name of a series of compilations/DJ mixes that has previously featured selectors such as Kenny Dope and Gilles Peterson. The Far Out imprint is turning 20 years in the business, so this latest volume is also a special celebration edition with the tracks selected by none other than label boss, Joe Davis. To complete the package, the collection comes together with a bonus mix by Joe’s personal friend, Mark Robertson, also known by his electronic moniker, Spiritual South.

As you may expect, the compilation is a warm summer trip taking you from the deepest of modern jazz to folkloric roots of traditional Brazilian music. Journey starts with the energy of Azymuth’s funky trio giving you their famous jazzy feel, then the samba flavours appear when Marcos Valle enters to the scene. Italian producer Nicola Conte is the only remixer on this side with his subtle version of “Brisa Mar” by Sabrina Malheiros. The rest of the adventure presents the wide spectrum of the label’s landscapes with various classical carioca rhythms: chilled bossa chords on “Meu Samba Torto” by Clara Moreno, capoeira’s berimbau sound courtesy of Naná Vasconcelos and funky world grooves on Democustico’s “Vagalume”.

The mix side takes you straight to the club, including some of the most renowned remixes put together with the more danceable originals from the label’s catalogue. It’s a selection of upbeat dance floor-ready tracks while still retaining the smooth and deep Latin vibe, meaning you can also rock it leaning back on a poolside with a cocktail in your hand. Electronic styles like breakbeat, house and nu jazz are all considered in the hands and vision of Spiritual South’s mixing skills.

Retrospective albums are always a good way to resume an artist or collective’s work, but for a label of the quality and history of Far Out Recordings, what you get is just a map to discover a world of roots and culture from one of the richest countries in musical tradition and sound experimentation, Brazil. So take a flight and turn yourself carioca.

Brazilika: 20th Year Anniversary Celebrating The Best Of Far Out Brazil & Beyond will be officially released on May 25th and is available for pre-order from Far Out, Amazon UK, Amazon US and iTunes.