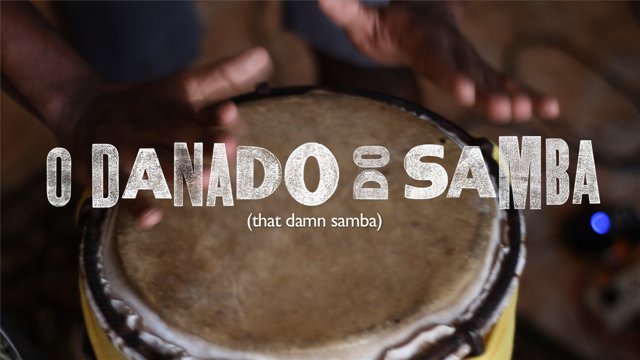 EXCLUSIVE: “That Damn Samba” – An Intimate Portrait of Samba

Charlie Inman – the co-director behind Gilles Peterson’s Brasil Bam Bam Bam: The Story Of Sonzeira documentary – recently put together a 30-minute documentary on samba and we’re very proud to be bringing it to you all as a Sounds and Colours exclusive.

O Danado do Samba (translating as “That Damn Samba”) was a labour of love for Inman. Sparked off by a chance encounter with a samba musician in London, he soon found his home taken over by rodas, all-night jams and samba sing-alongs, and a undoubted connection with Rio’s most famous rhythm had been struck. As soon as he got the chance he headed to Rio to discover the samba scene there, a trip which is documented in this great film, an intimate and personal portrait of samba that shows to what extent the music has a part in everyday Brazilian life.

Watch the film below and also read about its making and Inman’s “samba journey” in the interview underneath:

How did O Danado do Samba come about?
I used to run a club night in an old toilets in Shepherd’s Bush with Sam Sutton of the Fontanas, and one week we had a samba musician called Rodrigo Lampreia come to play as part of his mini tour of the UK. We got on well, and a few months later he decided he wanted to come and live in London for six months. He sent me an email to ask me if I could help him find somewhere to stay, and I suggested he move into my spare room. Over the next few months, my living room became an almost permanent roda, with visiting musicians from Rio sleeping on the sofa, and loads of new Brazilian friends coming round for big lunch parties that turned into all night jam sessions. Then his manager got on his case and he had to go back to Rio to finish off his album, leaving me with an itch to get over to Rio and see for myself what the samba scene was like over there. So I saved up, and next holiday, off I went with a borrowed camera, and a bunch of new friends to hang with.

What was your knowledge of samba before meeting Rodrigo?
I used to DJ quite a lot of easy listening, so I knew quite a bit about Bossa, and MPB, and also the funkier side of Brazilian music like Banda Black Rio, and I was well into newer stuff like Marcelo D2 and Seu Jorge, but I knew very little about old-school samba. It was Rodrigo who taught me how to play loads of the traditional sambas on the guitar, and it was at our regular rodas in the house that I really started to understand the social nature of the music. I love the way it brings everyone together and everyone knows all the words and sings along.

How did your time in Rio meet your expectations? Were you surprised by the samba scene that you found?
It totally blew my expectations out of the water. I had an amazing time. I knew I loved Brazilians from the couple of months I’d spent in Fortaleza with one of my best mates when I was 18, and from the excellent new friends I’d made in London during Rodrigo’s stay, but Rio was next level. Everyone I met was so helpful and kind. I ended up making another whole film about the Graff scene out there and found out the proper meaning of “Gentileza Gera Gentileza”. Everyone is totally pleased to help, and if you’re nice to them, they’re 10 times nicer back. I can’t really think of anything that surprising. I sort of expected people to be really nice and helpful and welcome me into their scene, and they did. It would have been really surprising over here, but I’ve found South Americans tend to be more like that.

I’m presuming that after that, working with Arlindo Cruz and the samba guys that Kassin brought to the Sonzeira record, must have been pretty amazing. Did it feel like a continuation of your samba journey?
Yeah, working on the Gilles Peterson project was really amazing. The journey of a lifetime. And the trip before to make this samba film totally prepared me for it. I would have been just as happy about Marcos Valle and Ed Motta, but because of the filming and digging I’d done before with Rodrigo, I really got the significance of people like Mart’nália and Arlindo Cruz rocking up in the studio, not to mention being able to hook up much better outings to take Gilles on with Ben Holman, my co-director. It really made us determined to get Gilles out of the studio and into the communities to check out proper rodas.

Do you have any further plans to explore samba?
I definitely have further plans to explore samba. I think it’ll always be a part of my life now. I’ve been bitten by the bug. I’m Danado! Hopefully there’ll be more projects with Gilles Peterson to look forward to, and I have a couple of other things I want to get into. I’d really love to get back to Cuba and make a film about some of the music out there, and I have a flamenco story to tell, which I should be able to get on to before the end of the year.