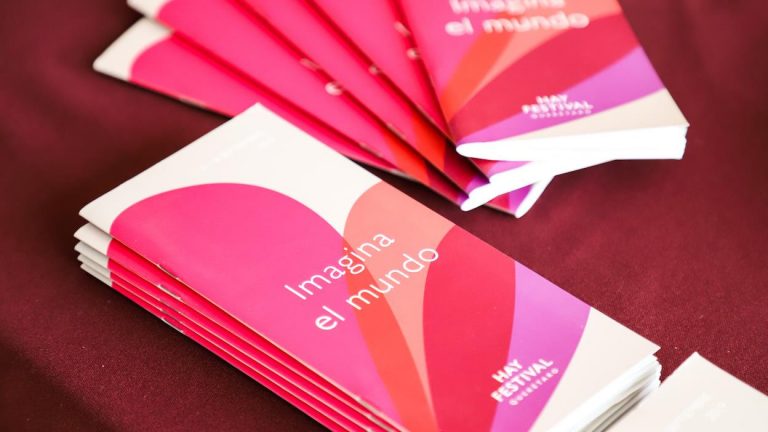 All events are free to watch online, but require that you reserve your spot on their website to watch the virtual event. Recordings of the events will also be available to watch for 24 hours after the live transmission.

We’ve gone through the week’s schedule to select a few highlights relating to Latin American art, music, current events, and literature in particular.

Monica Ojeda (Ecuador) is an exciting, recent voice in Latin American poetry and fiction, and was included in the Hay Festival’s own Bogotá39 list (which selected the 39 most promising Latin American writers under the age of 40). She will be discussing her work alongside Spanish writer Nuria Barrios and Mexican writer Araceli Ardón.

Actor, director, and producer Gael Garcia Bernal is perhaps Mexico’s best known film star. He will be talking about his second film as a director, Chicuarotes.

This event centres around Recetario para la memoria [A Recipe Book for the Memory], a recipe book created by women who are looking for disappeared family members that compiles the favourite dishes of their missing loved ones. Present will be Mirna Medina, who has been looking for her son Roberto since 2014, Spanish photographer and coordinator of the project Zahara Gómez, and Mexican chef Enrique Olvera.

Salman Rushdie in conversation with Carmen Boullosa
7:15 PM (1:15 AM BST)

Malala Yousufzai in conversation with Lydia Cacho
8:30 PM (2:30 AM BST)

In 2014, Malala Yousafzai became the youngest Nobel Peace Prize winner for her work in support of women’s education. She will be talking to Lydia Cacho, renowned Mexican journalist, feminist, and human rights activist.

Dilma Rousseff in conversation with Javier Moreno
8:00 AM (2:00 PM BST)

Left-wing politician Dilma Rousseff was Brazil’s first female president from 2011 to 2016, when she was removed from office under dubious circumstances. This talk was recorded at Hay Festival Cartagena earlier in 2020, where she spoke to Javier Moreno, Editor of the Spanish newspaper El País, about the future of the Left in Latin America.
(This event will be in Portuguese with Spanish subtitles)

Jon Lee Anderson is a prominent journalist, biographer, and author, and something of an authority on Latin America in general. He will be talking about his upcoming book, Los años de la espiral: Cronicas de America Latina, which is composed of dozens of reports on the region from the last decade.

Alma Guillermoprieto in conversation with Javier Lafuente
8:30 PM (2:30 AM BST)

Irasema Fernández is a visual artist, writer, and feminist who will discuss writing and illustration in the context of popular feminist movements in Latin America.

Camila Sosa Villada is an author, singer, and actress whose writings are often inspired by her own experiences as a trans woman. Among other things, she will be discussing her recent novel, Las malas (2019), which has been a hit in her native Argentina and will be made into a television series (read our review of Las Malas here).

Valeria Luiselli is a Mexican author, professor, MacArthur Genius Award recipient, and another name from the 2017 Bogota39 list. Much of her writing focuses on themes of migration and travel, including her most recent novel, the Booker-longlisted Lost Children Archive (2019).

Francisco Hinojosa (Mexico) has written over 30 books ranging from non-fiction to poetry to children’s literature. In this event (for ages 10 and up), he will be talking about his most recent book, Inchi Farofe (2019), about a child who likes to invent new words.

This talk brings together prolific Mexican fiction, non-fiction, and children’s author Juan Villoro and Spanish writer Irene Vallejo in a conversation about the Spanish-language literary tradition as a unifying link between the literature of different countries and generations.

Two-time Grammy-award-winning Latin music icon Julieta Venegas will perform live Saturday evening, in a concert “featuring the best of two and a half decades of music-making”. Read our 2017 interview with Julieta Venegas here.

Ida Vitale is a Uruguayan poet, translator, essayist, and critic, with a decorated career spanning across seven decades. She will be talking about a recently published edition of her collected poetry and her new book on her years in exile in Mexico, Shakespeare Palace (2019).

This forum will bring together US-based journalists Gerardo Lissardy and Patricia Sulbaran (from BBC Mundo) and special guest Maria Hinojosa (creator of NPR’s Latino USA) for a conversation on the November US election and its connection with Latinos.

Michelle Bachelet in conversation with Javier Moreno
10:00 AM (4:00 PM BST)

Elena Poniatowska is perhaps the most renowned Mexican writer and journalist active today, and has written more than 40 books and countless articles in the last 70 years. She will be discussing alternate “ways of imagining the world” during the COVID-19 pandemic.

A different Querétaro-based music group will perform an online concert every night of the festival, with the Piatti Quartet closing the week’s events on Monday evening. They will play an assortment of compositions and arrangements for cello, drawing from their diverse repertoire of classical and popular music.