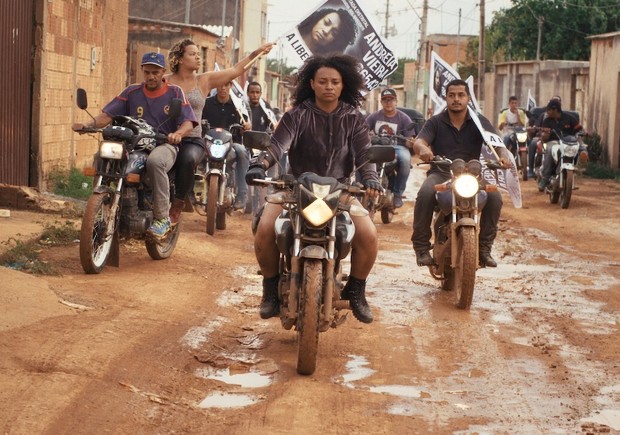 The Institute of Contemporary Arts (ICA) annual international film festival, Frames of Representation (FoR22) returns to London for its seventh edition this 5-12 May and will feature 14 films from four continents including three Latin American films.

Dedicated to the cinema of the real, this year’s Frames of Representation centres on the theme of Communality, investigating how filmmaking can provide both foundation and inspiration for collective action.

The festival opens on Thursday 5th May with the rousing Brazilian-Portuguese co-production Dry Ground Burning (Mato seco em chamas) by directing duo Adirley Queiroz and Joana Pimenta. Combining ardent political awareness with forward-thinking form, Dry Ground Burning merges documentary and drama to tell the story of an all-female gang that seize oil from a pipeline on the outskirts of Brasilia to sell to motor bikers in the Sol Nascente favela. The film sits alongside Kleber Mendonça Filho’s Bacurau as part of a movement of recent films fighting against the turmoil shaping contemporary Brazil.

Eduardo Crespo’s documentary The Delights (Las delicias) screens on Saturday 7th May and immerses us in the life of 120 teenagers in an agrotechnical boarding school in Entre Rios, Argentina. Despite the school being located in a high-crime area, Crespo’s documentary shows how the children – of differing backgrounds – live, learn and play together, and reveals the lessons and encounters they learn in a place where they are treated with compassion and understanding. Crespo has said that making this documentary restored his interest in film again because of the children’s innocence and purity.

On Sunday 8th May Lina Rodriguez’s My Two Voices (Mis dos voces) examines the experience of migration through the stories of three women who have relocated from Colombia and Mexico to Canada and the effects on their individual and social identities. Combining voiceovers layered over seemingly unrelated visuals – in a similar technique to that also employed in Tatiana Huezo’s documentary Tempestad about the painful experiences of two Mexican women  – the stories range from the terrifyingly extreme (hiding at home while Pablo Escobar wages war with local authorities on the streets outside), to the distressingly everyday (a victim of domestic violence suddenly awakening to the fact that she’s entitled to a better life).

Both Crespo and Rodriguez will be conducting a workshop on filmmaking practices in the context of Latin America’s turbulent political times that will take place on Friday 5th May.

Along with the Latin American films, there will also be screenings of films from Canada, Central African Republic, Czech Republic, Democratic Republic of the Congo, France, Germany, Italy, Iran, Myammar, Portugal, UK and the USA, all UK premieres. Frames of Representation will also include live performances, workshops, discussions and in-person Q&As. In addition, sound will find a newly curated space within the festival this year through a second collaboration with Bethlehem-based Radio alHara, a global collective of sound artists and musicians with a week-long residency at the ICA Studio and streaming live on their online global platform.

To see the full programme and book tickets visit: www.ica.art/for22