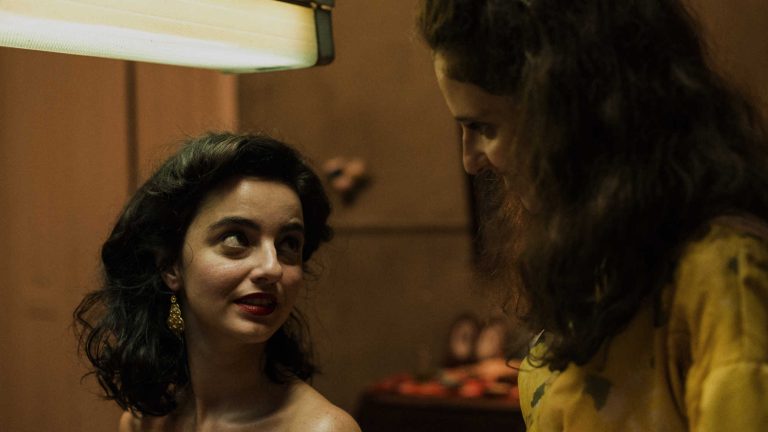 The Invisible Life of Eurídice Gusmão

The Invisible Life of Eurídice Gusmão, is a “tropical melodrama” adapted from Martha Batalha’s novel A Vida Invisível de Eurídice Gusmão. The film chronicles the tale of two inseparable sisters struggling with repression and prejudice in Rio de Janeiro’s machismo society in the 1950s. It draws upon the memories of director Karim Aïnouz, specifically memories of his single mother.

The film took the top prize in Cannes’ Un Certain Regard in 2019 and was put forward for an Oscar in 2020 for Best International Film. Quite a feat considering the uncertain climate that the Brazilian film industry is facing under Bolsonaro’s rule. This film proves that despite the negative climate for Brazilian productions and artists, there is hope for the industry, just like there remains hope for women living in Brazil today.

This sentimental and epic melodrama begins in a rainforest in Rio de Janeiro, where the two sisters: Eurídice and Guida (played by Carole Duarte and Julia Stockler) lose each other, their calls echoing amidst the dark, mysterious jungle. The pathos here immediately seals their fate, and we quickly learn that the term “tropical melodrama” is as much about emotion, feeling and sentimentality in the work as it is about making reference to Rio de Janeiro’s hot climate. The tropical setting alludes to the wild and ostentatious protagonists as it does to the amount of flora and fauna so dominant in the scenes, so much so that it almost merges into the characters.

The protagonist, young 20 year old Guida (the more rebellious of the two), yearns to find true love and escape from the grip of her conservative parents. Eurídice, the other protagonist, 18 at the time, also has a dream: of becoming a renowned pianist. But both of their dreams are throttled by the patriarchal society they live in where a lie their father tells to keep them apart leads them to live parallel lives in Rio de Janeiro.

The film portrays a raw, realistic glimpse into the treatment of women in the 1950s which is painful and often makes for uncomfortable viewing. Early on in the film, Guida runs away from home to elope with a Greek sailor, but quickly realizes her mistake and returns pregnant only to be disowned by her father. The ignorant father (played by Antonio Fonseca) lies to young Guida stating that her sister has moved to Vienna to pursue her dream of becoming a professional pianist. In reality, she has been married off to an abashed man (played by Gregio Duvivier) much of the same breed of her father. Her father never notifies Eurídice of Guida’s return to Rio, leaving her to only assume the worst.

Unlike any typical Hollywood movie, the sisters remain apart throughout their lives but continue to search for each other, exchanging letters that may never reach their recipient. But their absence and longing for each other is the key that holds them together, coupled with their strength of minds despite all obstacles. Touching on the Brazilian notion of “saudade” (the longing you feel when missing the one you love), the letters the sisters write to each other are some of the most moving and beautiful aspects of the film (and there is a lot of visual beauty here). Aïnouz does a miraculous job in making their exchanges and this notion of “saudade” as real as possible, so much so that the actresses Carol Duarte and Julia Stockler were prevented from seeing each other on set and encouraged to embark on their own emotional journey by writing letters to each other that appeared in the film.

While it might be frustrating that their unique paths never cross despite living in such close vicinity to one another, (albeit in different social classes), it’s exactly their absence from one another and their memories, which makes the film so heart-wrenching. As the title suggests (although perhaps a better title would have been “The Invisible life of Eurídice and Guida Gusmao” given the equal share of screen time both sisters have), it’s their “invisible lives”, what is left out of the film, that is so poignant. The film jumps through many different temporal time frames in order to construct a future for the sisters and we are left to fill in the missing gaps ourselves, to construct in our imaginations what happened to the sisters over the years, just like they had to do themselves.

The women’s connection and the abuse of their physical bodies, sexuality and spirituality speak volumes about the traditional gender roles so prevalent in Rio de Janeiro in the 1950s. In the sexual scenes, Karim Aïnouz portrays daring and graphic moments that few directors would dare to expose. Eurídice’s husband has some questionable ideas on what constitutes marital consummation, Guida sells her body to buy pills for her dying friend, when Eurídice is undergoing a psychosis, the doctor tells her husband that she’ll quickly recover so that she can continue her role as a mother to her unborn (and unwanted) child.

Indeed, it’s important that men are presented in such a negative light throughout the film and that they remain firmly in the background. The psychosis of Eurídice demonstrates how the deceit, lies and poor treatment from the men in her life led to her psychosis. But while her hospital sectioning remains invisible to the viewer, it would have made for fascinating viewing, even if the film time would have bypassed the already 139 minute run time.

Despite all of their obstacles and intense suffering, the sisters remain the true heroines of the film. Karim Aïnouz’s use of colours: the saturated hues of red, yellow and green make for captivating, beautiful cinematography, coupled with the gorgeous costumes that embellish the not so pretty treatment of women. With its lush musical compositions and sounds, most notably Eurídice’s Beethoven ensemble at her piano audition, and it’s weep-inducing finale thanks to the appearance of the 89-year old Brazilian grande dame Fernando Montenegro, don’t be surprised if you find yourself tearing up hours after the film is over.

This film is much needed given the reception of Brazilian films of late. It successfully paints a raw and sublime picture of Rio de Janeiro in the 1950s and is undoubtedly Oscar-worthy material.

The Invisible Life of Eurídice Gusmão is available to watch on MUBI.