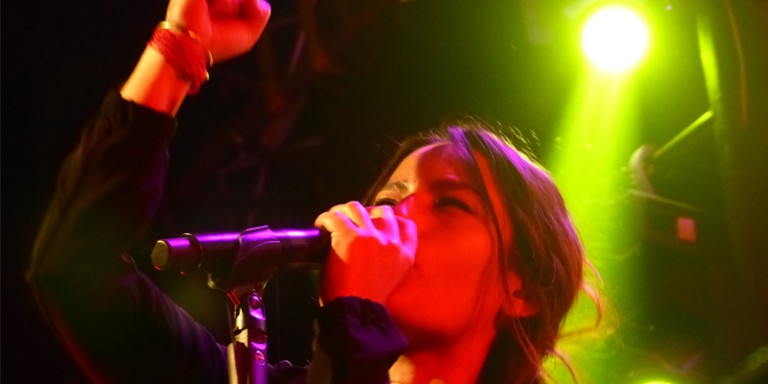 Anita Tjioux: Bigger, Better and Brassier Than Ever

Kicking off 2016 with various festival appearances throughout her homeland Chile, Anita Tijoux has spent her springtime forming and rehearsing with a new band. Luckily for Santiaguinos, Anita has dedicated a large part of March and April playing gigs on a weekly basis at a variety of venues, from free outdoor events to small club rooms.

I caught her at the latter, in the tiny 250 capacity venue El Clan. El Clan’s stage is parallel to the bar, so only a few of the packed in audience could actually see the stage. It was an intimate affair.

Even those who couldn’t catch a glimpse of Anita T got their money’s worth; Anita’s new band sound incredible. The set opener “Vengo”’s melodic pan-flute intro is replaced with brass notes, translating it to a larger sound, filling the room. This doesn’t drown Anita’s vocals out, but rather complements it. On disc, “Vengo” relies on the panflute to draw on traditional South American influences, which captures the musical direction and theme of the album. None of this is lost in the stage version. It just sounds different, and more suitable to a live performance backed by a full band. The audience have no choice but to move; to dance; to be immersed in the sound entirely. 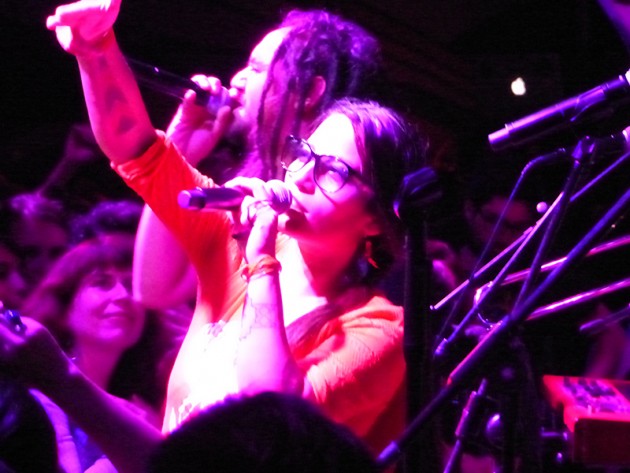 All in all, this was a flawless performance. Anita is an engaging performer; she talks little yet succeeds in connecting with her audience. Even older songs such as “1977” and “Sacar La Voz” are performed with as equal passion and meaning to more recent ones.

I was curious to see if this sound would work as well in a bigger venue, so I went to her show in the larger Club Chocolate. In short, the answer was ‘yes’.

The Club Chocolate set was a more lavish affair, and a more politicized one at that. The set was complimented with a projected display designed for each song; rolling images of female icons backed “Antipatricia”, a song which confronts female repression. “…Tu no me vas denigrar, tu no me vas obligar, tu no me vas a silenciar” Anita spat out, as the images of women, such as the recently murdered Honduran activist Berta Caceres, were projected on stage. It was a powerful and affecting moment. 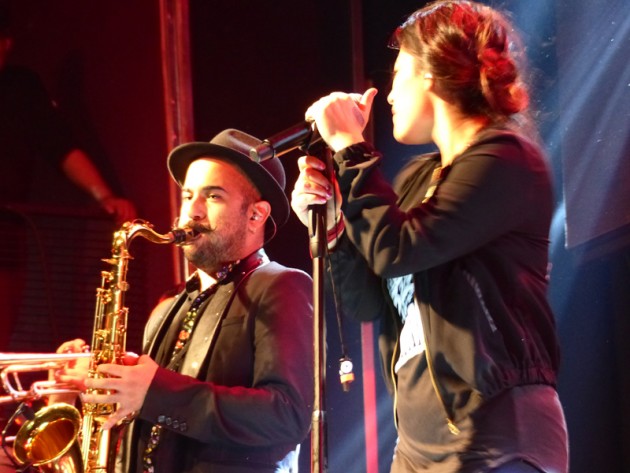 Although she released a few new songs last year, Anita’s set remains largely unchanged from her 2015 Lollapalooza performance. In both shows, popular singles such as “Shock”, “Vengo” and “1977” were performed early on in the set, getting the audience engrossed from the very start. In the latter part of the show, Felipe Ramos joined Anita on the stage for “Creo En Ti”. The two have been performing this song together for years and their familiarity and chemistry added a fun element to the onstage atmosphere.

After a short encore in Chocolate, Anita closed the set with the rapturous “Somos Sur”. She returned to the stage holding a Mapuche flag, reinforcing the songs statement, supporting the indigenous Mapuche’s right to their land in the south of Chile.

Anita Tijoux voices countless political battles happening in Chile and South America; she has soundtracked the students’ fight for education, women’s fights for their rights, the Mapuche’s fight for their land. This bigger sound serves to emphasize the weight of the topics she is singing about.

It’s worth pointing out that the Club Chocolate show wasn’t even a headline gig; she was opening for Argentine band Las Manos de Filippi. A large headline show is scheduled in Santiago in June, which will première new material and boast an even more comprehensive sound. Given the direction Anita Tijoux is heading with these warm up shows, it promises to be something remarkable.

All photos by Ruth Álvarez Molony