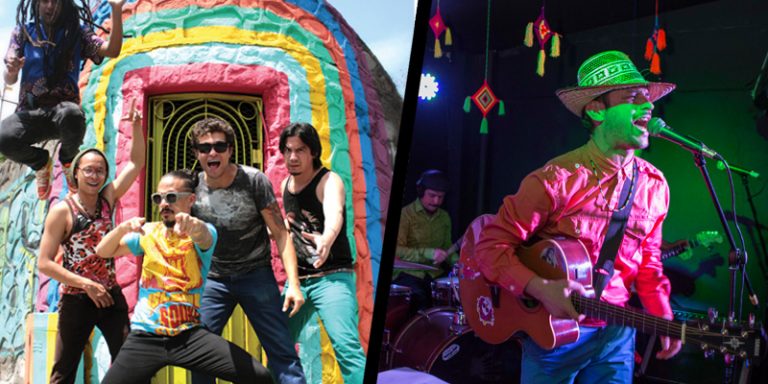 Two exciting bands from Colombia will be heading their way to Rich Mix in East London on Thursday 29th June as part of Movimientos‘ New Sounds of Colombia event.

Both Masilva and Colectro have been active for a number of years in Colombia, where they have been building a strong fanbase and fine-tuning their sound, no doubt, in preparation for this first trip to London.

Colectro are all about the sound of Colombia’s Caribbean coast, taking influence from bullerengue, jalao, chalupa and son de negro, offering a take on the Colombian Caribbean sound a little different from the normal cumbia focus, as the band’s singer Gonzalo Prieto mentioned in an interview with S&C about their last album, Coletera. They then take these Afro-Colombian roots in all manner of directions, offering an energetic folkloric rock-tinged fusion.

The love for recovering roots and offering up new hybrid takes on them is also the modus operandi of Masilva, the project of Camilo Martínez Silva, a Colombian native who has spent the past years travelling between London, Madrid and Lima before finally getting back to Bogotá, where his last album, Juglaría Gallinaza, was recorded. Masilva’s sound takes inspiration from many Latin American rhythms as well as electronic music from across the globe, making any easy definition of their sound very tricky indeed. Perhaps that’s why Masilva has taken to calling the sound electrovador, amalgamating the life of a troubadour with that of the electronic rhythms which are at the heart of the songs.

New Sounds of Colombia featuring Masilva and Colectro will take place at Rich Mix on Thursday 29th June at 7.30pm. Both artists will also be playing Glastonbury as part of a Colombia takeover!

Tickets are available from bit.ly/2qWP9tz

Watch the video for Colectro’s track “Son De Negro” below. It’s video was inspired by the Son De Negro traditions from which the track takes its name. If you’d like to find out more about the video and those traditions take a look at our article on the video here.