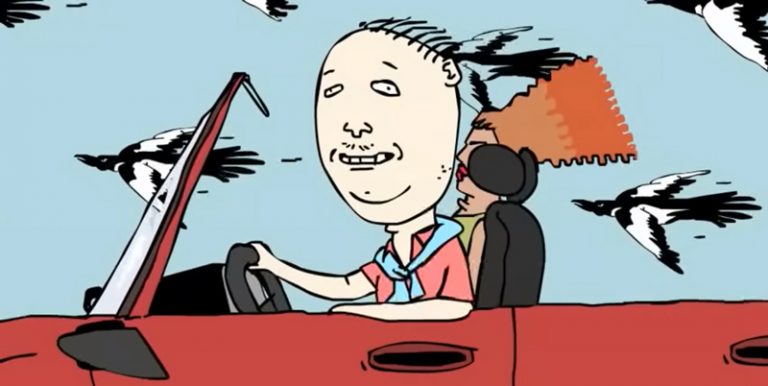 With what looks certain to be a triumphant London show happening tonight we are very happy to be making public the brand new video from Colombia’s avant-garde tropicalistas Meridian Brothers.

Animated by Mateo Rivano (whose work has also been featured on albums by Frente Cumbiero and Romperayo) the video for “Estaré Alegre, No Estaré Triste” sees the male protagonist of the story take his lady to the beach and out to lunch, as well as for a spin in his fast car and for a romantic evening dancing, before his dream romance takes a sinister turn with the arrival of a “victorious vulture”.

With translated lyrics in English the video is a great way to experience the surreal dramas that unfold in many Meridian Brothers songs and the way that Colombian stereotypes (here in the shape of the wannabe romancer) feed into those narratives. It’s also one of the finest tracks of the new Meridian Brothers album, ¿Dónde Estás María?, an album that captures the group in fine form, continuing their exploration of Colombian rhythms while also adding in elements from Brazilian MPB and Peruvian huaynos. The result is one of their most accomplished works to date.

Meridian Brothers will be playing at London’s Rich Mix on Tuesday 19th September, followed by Bristol’s The Attic Bar on Wednesday 20th, after which they will be heading to mainland Europe for further dates. For a full list of tour dates click here.