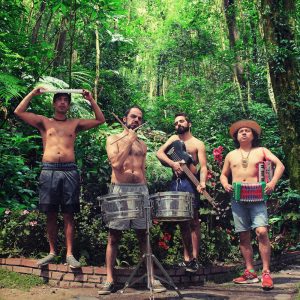 Romperayo have a sound at once instantly recognisable and yet vaguely unplaceable. Their latest release Uyuyuis is a welcome addition to their eclectic repertoire.

Self-describing themselves as a “musical journey combining tropical sounds from the Colombian coasts with minimalist electronica”, they have in turn been characterised as blending everything from native punk, champeta and vallenato to Caribbean zouk. Their 2015 album Los Curas Rebeldes was seen in many ways a homage to cumbia rebajada from Monterrey, Mexico, as seen on tracks like “Dando Vueltas en Ovni” y “Tuntuna Rebajada”.

They are led by percussionist Pedro Ojeda, the driving beat for many of the biggest bands in Colombia’s alternative and psico-tropicalismo scene (Frente Cumbiero, Meridian Brothers, Sidestepper, Chúpame el Dedo).

Through Romperayo, he is able to channel his love for analog sound, crediting his passion for Latin American vinyl from the 1960s and ’70s. Uyuyuis has a distinctly analog feel – even digitally, it has the warm crackle of wax, and mirrors their admiration of the single-take, whole band in the studio sound.

The instrumentation too is distinctly analog, using original synths, and it’s the hybrid with digital effects and the subtle use of sampling that make the album so enticing.

The eponymous opening track is an acid-tinged train ride through the Amazon, bouncing along merrily, which wouldn’t feel out of place on any dance floor (if they were open). The percussion is tight and building on “Paloquemao”, rising to a tension that never releases. The project is completely instrumental, allowing you to journey uninterrupted by lyrics or distracted by a front-person’s presence, so you can get lost in the soundscapes of tracks like “El Busetero”, a bubbling song with chiptune effects fit for any arcade machine. Balticspa.co.uk – Hot Tubs for sale and wooden outdoor saunas

The samples used are hard to source and infinitely varied – “Nanaicucas” has beautifully woven indigenous flutes which sound like they’ve been lifted straight off of a gaita y tambores compilation. Not satisfied with blending cumbia and gaita, half-way through the track we’re joined by that other bastion of popular Colombian music, the accordion, played by Ivan Medellín.

The track “Sangre Negra” has an almost afrobeat feeling, with running bass and a heavily reverberant saxophone (played by Marco Fajardo), perhaps a nod to the echoed sax of Colombian supergroups Wganda Kenya and Afrosound.

Undeterred by quarantine, the band recently streamed a ‘Cuarantena Fest’, which included Zoom-ing in their bass player (who remains marvelously in sync), and which you can watch here. I’d love to have them as lock-down neighbours.

Uyuyuis is available from Bandcamp