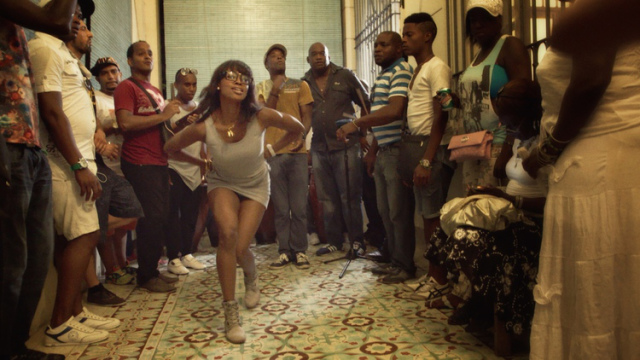 Nearly thirty years have passed since Gilles Peterson curated his first Sunday afternoon session at the legendary Dingwalls club in North London. From these modest beginnings, he has now become one of the premier tastemakers in UK dance culture; a certified aficionado whose musical palate has been continually informed by a vibrant global tapestry of flavours, rhythms and sensibilities. In 2014 he teamed up with filmmaker Charlie Inman for an intriguing endeavour that traced his journey through Rio de Janiero, bringing together legendary artists such as Elza Soares, Seu Jorge, and Arlindo Cruz for a collaborative album and film entitled Brasil Bam Bam Bam. This new outing sees them reunite for a similar project, entitled Havana Club Rumba Sessions: La Clave, that follows another of Peterson’s most enduring influences: the rumba styles of Cuba.

The documentary is shot beautifully – capturing Cuba’s idiosyncratic architecture and beauteous landscape – and the perspective pregnant in Peterson’s observations is compelling, inviting the viewer to embark on this voyage of personal discovery with him. It begins with an introduction to Cuban music, and through the more commercially accessible style son – which achieved worldwide notoriety in the 90s courtesy of Buena Vista Social Club – we arrive at both a highly informative, and evocatively painted presentation of Cuba’s most cherished musical form. Heartfelt testaments to the role of rumba in everyday life are juxtaposed with incisive analysis that picks apart its musical origins, social functionality, and the three principal dance styles: guaguancó, yambú, and columbia.

Peterson is accompanied by Adé Egun Crispin Robinson (an expert batá drummer) and Brownswood recording artist Dayme Arocena for the duration of the trip. Both their personal contributions and assistance ensure that this is a holisitic, and committed endeavour, resulting in some truly enchanting meetings of musical minds. There are contributions from the head of Rumberos de Cuba, Rodolfo Chacón, renowned dancers Jennyselt Galanta Calvo and Domingo Pau, and new performers who are reinvigorating the form for a contemporary, younger audience.

But perhaps the most enchanting aspect of this documentary is its sensitivity to the complexities surrounding the music, its progenitors, and its heritage. It is a form that is seen as primarily profane, yet rumba has spiritual origins derived from Santería, Abakuá and Palo, which are manifest in sacred drums that are also utilised in rumba playing  – said to carry the spirit of the orisha – the lyrical content, and dances of devotion. Inman’s portrayal of these three principal religions, outside of the staunch Catholicism that acts as an unwelcome hangover from colonial rule, and their respective influence on the people of Cuba, their lives and their music is admirable, and at times rightly radical in readdressing essentialist conceptions that have been applied to many religions of African origin by occidental rhetoric.

Furthermore, it expertly demonstrates the intricacies of rumba. This is a form regularly dismissed owing to its working class origins, and the problems that hold it back are eloquently presented by Rubén Bulnes (of Osain Del Monte) at the film’s outset, with Adé Egun lamenting that it’s never been considered as worthwhile by the island’s bourgeoisie. Fortunately, the subsequent footage dispels the myths and false conceptions that are attributed to rumba, elucidating its effect on the cha-cha-cha and the mambo, its multi-faceted performance styles, and continued impact on the music of a new generation of ensembles (such as Osain Del Monte and Timbalaye) notwithstanding an entire global network of musicians and DJs forever indebted to La Clave.

Havana Club Rumba Sessions: La Clave is receiving a theatrical run at the ICA in London, from January 30th 2016.