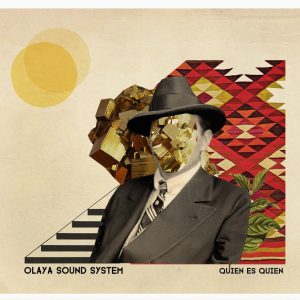 The roots of Peruvian music are inspiring fresh new fusions from fertile bands like Bareto, Pangolin Sound System and Chintatá. It’s not just about them putting value in their immensely rich musical traditions, it’s about the knowledge, the love for indigenous cultures and respect for nature. Olaya Sound System‘s music is all about the roots and culture vibrations, mixing psychedelic Amazonian sounds with reggae, dub and cumbia.

The band formation consists of Lorenzo Zolezzi on guitar and vocals, Matteo Bonora (known by his dub producer alter ego Loko Bonó) also playing the guitar and grabbing the mic for additional vocals, Alonso Rodríguez on bass, Rodrigo Castillo behind the drum kit and Ricardo Canales paying the keys. In addition to this group is Carlos Morales as an audience entertainer and Ximena Gonzales who recently took charge as manager.

With the success of 2012’s Nuestra Casa, that took them to several cities in Chile for their first tour outside of Peru, and their debut album Nadar En El Cemento from 2010, they have built a musical repertoire that includes classic hits like the cumbia chicha-infused “Ver Más Allá” and the reggae dub track “El Sol”. Latin American folkloric music with a forward thinking-perspective, which is resembled in the band’s quality and creativity.

Their latest release Quién Es Quién is filled with the energy of the band’s upward-trajectory, featuring beautiful songs like “Jacarandá”, that talk about enlightenment through nature and its inspiration for living each day with passion, and the romantic free love declaration of “Desaparecer” that goes: “all I want to do is disappear with you, to the mountains or in the middle of the sea, I don’t care” in a soft tropical beach ambiance that could be described as a mix of bossa nova and dancehall with a surf rock flavour. Not to be overlooked is a short power salsa anthem about the legalization of marijuana called “En Mi Jardín”.

If you already like the fusion of the Peruvian classic gems from the past that are currently taking over the world in compilations by Barbes Records, Tiger’s Milk and Vampisoul, dive deep into the organic sounds that contemporary bands are adding to the modern landscape of Peru’s tropical music.