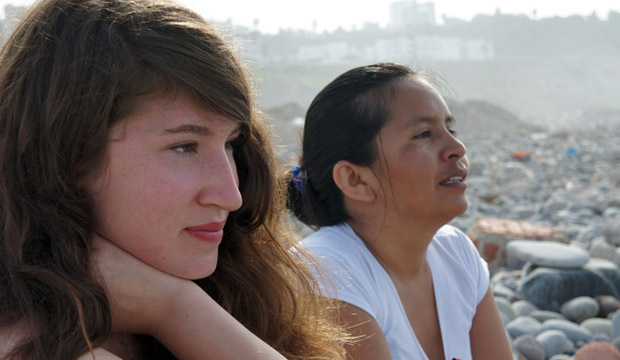 Storm In The Andes

Josefin is seeking the answers her father never offered about the land and family he had left behind in the 1980s, whilst Flor is one of many Peruvians still fighting for justice on behalf of the estimated 70,000 killed or disappeared victims of the civil war. Brought together by Wiström’s project, the influential role of Josefin’s aunt in the movement which Flor blames for the death of her brother creates an uneasy yet enthralling chemistry between the two.

Through a diverse range of interviews with family members, campesinos, historians and lawyers, the two women bravely trace their families’ actions through 40 years of Peruvian history. Flor remarks that “Peru cannot forget what has happened” and the film certainly treads cautiously around what remains a very much open wound in the country. Whilst stopping short of portraying the Senderistas as the cultish fanatics of Mario Vargas Llosa’s Death In The Andes (Lituma En Los Andes), the presence of the understandably conflicted Josefin does not however prevent it from holding Augusta, Abimael Guzman and other Sendero leaders as accountable as the military for the bloodshed. Interviewed Quechua labourers explain to the viewers that Sendero promised a chance to derail the oppressive labour system which had shackled the Andes since the time of the Spanish conquest; nonetheless when faced with her aunt’s personal effects behind glass in the police’s Museum of Counter Terrorism, Josefin’s reconciliation with her family’s role at the head of the Maoist revolutionaries is rendered all the more difficult.

The film is masterfully shot and as one might expect from a western production in Peru, it makes a star of the landscapes of Apurímac and other featured locations. The intention is undoubtedly to juxtapose the cruelty of the civil war against the natural beauty of the region, however at times the sweeping time-lapses of the cordillera narrated by the protagonists’ reflections create a fantastical quality, one which almost lulls the viewer into forgetting they are in fact watching a documentary.

Ultimately Storm In The Andes is an incredibly intimate and localised insight into a dark epoch of South American history, one marred by military juntas and forced disappearances. Whether or not one has a wider interest in the events sparked by Sendero Luminoso it is impossible not be captivated by the remarkable narratives of Flor and Josefin and indeed the journey of Wiström, who has come full circle from his days as a photographer in Tancayllo, amidst the early gatherings of the Sendero Luminoso.