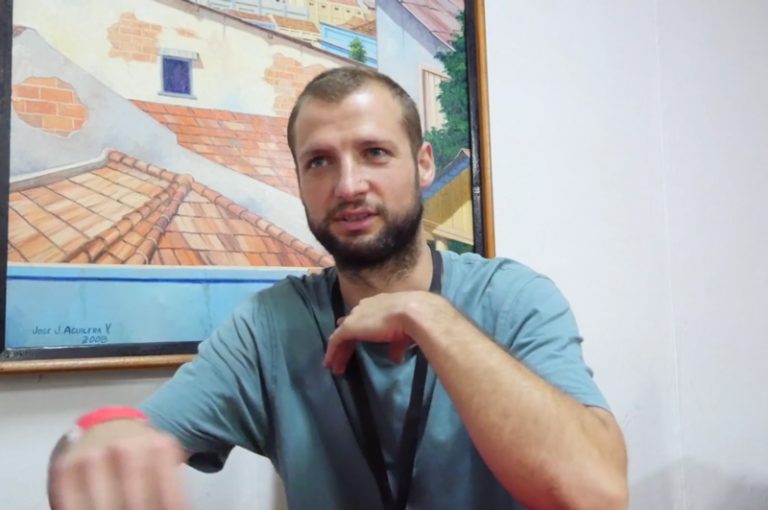 Milillian Galis is widely considered to be a living master of the batá drums and, some years ago, he had throat cancer. Now he speaks through an electrolarynx, which is literally a voice synthesizer. These devices never really sound very pleasing to the ears, and it’s always a bit strange to see someone hold a machine up to a hole in their neck in order to speak, but he is perfectly comfortable with it, as if master drummers just naturally start to sound like robots when they get old.

He claims to have been the first person to bring the batá drums from the Havana / Matanzas area to Santiago in 1952. The batá have their origin in Yoruba (Nigeria) and, for most of Cuba’s post-colonial history, were only found in the western part of the island, which is where the vast majority of Yoruban slaves were brought.

“The drum dates back roughly 500 years, and is believed to have been introduced by a Yoruba king named Shangó, ‘el rey del tambor’. Despite the previous long history, awareness of the instrument didn’t spread until the 1800s slave-trade in which close to 300,000 Africans were brought to Cuba. The religion and beliefs the Yorùbá brought with them eventually became the basis for what is known as Lukumí (or Santería in Cuba). This religion spawned the creation of the first “sacred” Batá in Cuba around 1830 by a Yorùbá named Añabi. The Batá slowly became inducted into the Cuban culture after a time, and began to take on more secular uses: they were first publicly performed in 1935 in a broadcast over Cuban radio for purposes of folklore music. Uses such as this have grown as knowledge of the instrument has spread; more and more musicians not currently practising Lukumí have used versions of the drums in recordings or performances. These “non-sacred” Batá drums are called aberínkula — profane Batá. Batá drums and rhythms have started to be used in other genres, most notably in Cuban timba, jazz and hip hop. In the 1970s, for instance, a mixture of Batá drums and Big Band called Son-Batá or Batá Rock became popular, a genre highly influenced by Irakere.” —  en.wikipedia.org/wiki/Batá_drum

These drums can now be found in many types of Latin fusion music, from Irakere in the 1970s to the currently popular French/Cuban electronic R&B duo, Ibeyi, to Galis himself playing the large batá (iyá) drum onstage with Pouya from Ariwo.

Galis is the batá drum teacher of Harry Follett, the co-director the MANANA Festival. While Follett is not himself a practitioner of Santería, he has been initiated as a drummer by Galis with a ceremonial washing of the hands, a ritual signifying that the student may continue to learn the rhythms of the batá.

When I discover this in an interview with Follett, it occurs to me that these drums could be seen as a kind of musical mascot for the MANANA festival. The batá, for me at least, seem to imbue the entire festival with a sense of Afro-Cuban ritual music history. There is a musical weight and intentionality at MANANA I’ve very rarely seen in other music festivals, electronic or otherwise, and these drums seem to add to it.

Follett and Alain manage to pull off this balance of secular and sacred musical sensibilities in a way that conveys the history of this essentially ritualistic music without MANANA purporting to be a spiritual or religious musical event. I imagine there are more than a few MANANA festival goers who — like an increasing number of people these days (myself included) — don’t care to put labels on their relationship with the creative energies in the universe. Much like some atheists or agnostics who are perfectly fine being awestruck by the beauty and mystery the universe without needing to assign it some kind of deist conceptual framework, the music projects created at MANANA, depending on the proclivities of any given listener, are equally powerful as either deeply spiritual music experiences, or simply a great experiment in combining live folkloric and electronic musical styles.

It was Galis, says Harry, who encouraged Alain and him towards the idea of combining Afro-Cuban batá rhythms with electronic music to make MANANA Festival into an intercultural exchange project and festival rather than just an Afro-Cuban music meets electronic music album project.

When the time comes for Galis to perform on Friday afternoon, Harry goes around to everyone he can find in the Teatro Heredia’s main gathering area try to get them into the main theatre. This is a key performance of the festival where his master drum teacher will be performing with Pouya and I’ve not seen him get so personally involved with any one show so far.

When the trio hits the stage, I’m pleasantly surprised to see that the trio includes a female batá player. This was the first time I’ve seen this in a traditional Cuban instrumental trio and the fact that it’s with a player of Galis’ stature and standing in the community makes it all the more fascinating. The batá drums, and percussion in general, are not often played by women in Cuba. That is changing and this drum taboo seems to only now extend to fundamento (sacred) batá drums. But perhaps the tide of the traditionally male-dominated Afro-Cuban music and religious culture is changing alongside the diplomatic shifts in Cuban relations with the USA. The Iyá (“Mother”) batá drum is, after all, a female drum dedicated to Yemaya, the Orisha of the ocean, so it seems appropriate that a woman could play it in any context.

Galís is wearing a white beret and a colourful, patterned red and black shirt. His face is leathery with that taught-skinned, slightly caved-in look that skinny old men sometimes get with age. He has twinkly eyes, energetic and joyful even after years of hard-earned musical experience. As he opens the performance playing the largest of the three baatá, the iyá, he is intensely focused, eyes looking upward, mouthing the rhythms that have been imprinted into his memory for the last half century.

The instrumentation is simple but the music is rhythmically quite complicated. There are no obvious song forms, no build-ups and no drops, only continuous polyrhythmic repetition with gradual, subtle variations over time and occasional spontaneous outbursts of accentuated notes on the larger drum head. For nearly 10 minutes, Pouya looks on at the performance from his onstage mixing desk and one begins to wonder what exactly he is doing to collaborate with this trio other than simply amplifying their microphones. Then, slowly, he begins to bring up the gain on an effect that sounds like a ring modulator on the mic signals of the drums (a ring modulator outputs the sum and difference of the frequencies from two input signals).

“Pouya’s live processing pushed the sonic boundaries of Gali’s ancient Yoruba batá rhythms, exploring their tonal possibilities, and shaping the pinpoint accuracy and energy of the percussion. The result was a truly special exchange of musical craft and culture that both challenged and pulled audiences together at MANANA.” — Manana Festival website

It is the last night of the festival and I have a decision to make. My bus for Havana is supposed to leave at 12:30 am. Ariwo’s performance — the last one of the festival — is scheduled for midnight. There was no way I can do both. There is another bus at 6:30 am, but no guaranteed seats on it. All the flights are sold out. My friends who are driving back to Havana have a totally full car. After consulting with them and weighing the options, I make my decision. This show is, in many ways, a summation of what MANANA is all about and to miss it would be to miss out on the grand finale. I decide to stay.

I sit in my seat in the middle of the theatre. The performance starts off with a cinematic blast of low end, saw-wave-driven bass synth in A-flat, run through heavy distortion and delay. Imagine the sonification of the Big Bang. A man standing stage left, dressed in white, begins to call out the names of the Yoruban orishas, with his voice running through a delay effect as well. An invocation for the spirits to enter the room perhaps.

After a few minutes trumpeter Yelfris Valdes enters the mix with a slow, two-note modulation between A-Flat and E-Flat, reminiscent of the opening notes of Richard Strauss’ epic tone poem “Also Sprach Zarathrustra”, as immortalized on film in Stanley Kubrick’s 2001: A Space Odyssey. Valdes then introduces some pentatonic improvisational soloing, starting the set off on a distinctly middle-eastern melodic path from Cuba back over the Atlantic, across North Africa and into Israel, Jordan, Iraq and Iran. The rhythms, however, remain firmly planted in Afro-Cuba.

Percussionists Oreste Noda (congas) and Hammadi Rencurrell Valdes (batá, timbales, mallet percussion) are only playing ambient flourishes at this point but the effect is palpable. The musical mood is like simultaneously watching the cold pre-birth and heat death of the universe.

Slowly, out of the earth-shattering blastwaves of synth, an undulating bassline appears and Hammadi begins to play the batá. Then a 4/4 electronic bass drum emerges from the low frequency oscillations. The percussionists pick up on a house beat and start playing with more force and accentuation. Yelfris comes in and out of the mix, letting the drums resonate and excite the air in the theatre. His trumpet punctuates the air in that lonely way that only a trumpet can. Think Bitches Brew-era Miles Davis playing Afro-Cuban space house.

As the music progresses it becomes clear that this will not be a concert of 3–4 minute songs with any discernible pop, jazz or classical music-based structure. Rather these are improvisational pieces meant to evoke a mood by repetition of rhythm and melodic improvisation.

As the music progresses into a more steady 4/4 rhythm the audience goes from sitting still and cross-armed in their seats to bobbing their heads a bit to the music. After about 20 minutes or so people begin to get up out of their chairs and actually start dancing in the aisles. About halfway through the performance, Oreste Noda’s son Franco, an accomplished student of dance at Havana’s premier dance school, comes onto the stage dressed all in black to do an interpretive, improvisational dance to one of the songs.

The stage lighting is minimal but effective, white spotlights illuminate the band, and moving lights and strobes punctuate an otherwise dark theatre. Flashes of purple and yellow and red flicker over the faces of band and audience members.

I remained in my chair the entire time. While I love dancing, this was music that, for me, inspired serious and deep introspection. It made me think about the journey of music across continents and how the sound waves being produced in that room were the cumulative result of hundreds of years of musical evolution now echoing into space.