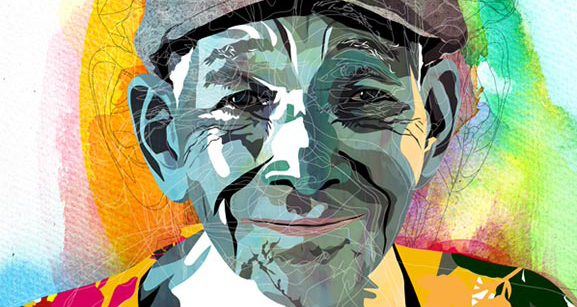 Magín Díaz, who fell ill while in Las Vegas for the Latin Grammys in which he was nominated on his first solo record, died on the 28th of Nov. He was 95 years of age, according to El Heraldo of Barranquilla.

The bullerengue singer, who emerged out of obscurity in recent years, died at 9:24 p.m. (PST) on Tuesday due to a respiratory complication.

According to his manager, the composer of the Latin Grammy-winning album El Orisha de la Rosa died “in complete peace, being held in one hand by his son Domingo, and in the other, by [his manager] Daniel [Bustos], and, at his feet, [executive producer] Sebastian [Monroy].”

Díaz, the winner of Colombia’s “Premio Vida y Obra del Ministerio de Cultura (Life and Work Prize of the Ministry of Culture)” for 2017, had his latest album nominated in the categories of Best Folk Album and Best Recording Packaging Design, the latter of which it won.

He was the ceremony’s oldest nominee and would have found out that his album had also been nominated for a 2018 Grammy award for Best Recording Package, along with albums by other outstanding artists such as Jonathan Coulton, Mura Masa and Father John Misty.

Díaz was born on October 30, 1922 in Gamero, in the region of Bolívar. There he learned to sing about everyday life. He was responsible for popularising great bullerengue pieces of the Caribbean cultural tradition such as “Rosa”, “El Lobo”, and “Me Amarás”.