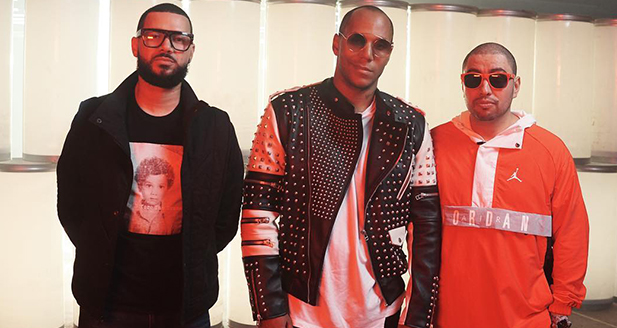 Bogotá’s El Freaky premiered a new video via our friends at Remezcla, and it’s a hot one!

As written by Sara Skolnik, who goes by Riobamba when DJing, the single “Twerk It,” is the collective’s first release via their new home at Universal Music Latin Entertainment’s dance-focused imprint Aftercluv Dancelab, which operates entirely in the Latin American and Iberian peninsula region. The dancehall and moombahton heavy track features El Freaky along with fellow Colombian artists Buxxi (pictured above at center), Jiggy D (pictured above at left), Irie Kingz, and Stanley Jackson, “some of the key names responsible for pushing Mode-Up, the homegrown scene transmitting from the island of San Andrés.

“Though the song brings a fresh take on mid-winter whining, El Freaky’s history of amplifying the work of San Andrés’ bass visionaries is hardly anything new. El Freaky has years of collaborations with their country’s artists from the Caribbean coast and islands, and hold space as an outfit of unofficial ambassadors for the Mode-Up movement native to San Andrés,” Skolnik says. “With lyrics in San Andrés’ version of an English-based Creole, the music is also a living soundtrack of resistance to colonialism in the region, with the island being previously controlled by England before Spain.”

And, as El Freaky’s Andres Shaq (in above photo at right) tells Remezcla, there will be more where that’s coming from: “There’s a lot of talent on this island [of San Andrés] and I can’t wait for the world to see what we’ve been cooking.”

Watch the video below and read more about this track and collaboration at Remezcla.