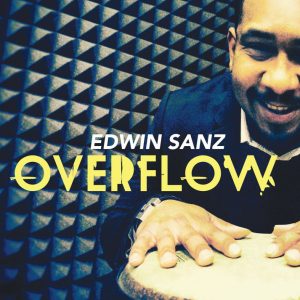 It starts in a madcap whirl of old-school R&B and London gospel, intertwined with spiralling Latin brass and percussion. And by the time it comes to an end, nine songs later, the new album from Venezuelan artist Edwin Sanz leaves you gasping at its musical breadth, its daring enterprise, its global depth.

Overflow is an apt name when you bear in mind the three major threads that dominate the record: the range of genres; the complexity of the experimental covers and new numbers; and the galloping Latin heartbeat.

The third number is a rework of Screamin’ Jay Hawkins’ regularly-covered “I Put A Spell On You”. It is a belting Latin alarm-call kicked off with domineering and haunting female vocals. The influence of Stevie Wonder comes through strongly in “Something About You”. The cowbells are still trilling away, but this number shows Sanz’s skill when it comes to soul and slow funk.

With “Eres Tú”, we get back to the Latin heritage. It is a typical salsa serenade with a group refrain and a lead male singer, who is classically and deferentially romantic. Songs such as “Cómo Olvidar” are more traditional yet at other junctures on the album he offers gear-shift alterations to the Latin norm: just under two minutes into “Ella” there is a sudden acceleration from a slow-dance romance to a fire of slick salsa.

Overflow is a bilingual album chock-full of international influences and appearances from world artists. The first lines of the opening song are “From New York to Caracas, from LA to the UK”. Sanz has noted how his musical career has been shaped by his time studying and playing in the US and Europe. But though his music has adapted and developed across time and countries he shows his commitment to the land of his birth throughout the album, notably with the final track “Yo Vengo de Venezuela”, a colourful celebration of that country’s rich musical history.

Overflow is out now and available from Amazon UK, Amazon US and iTunes