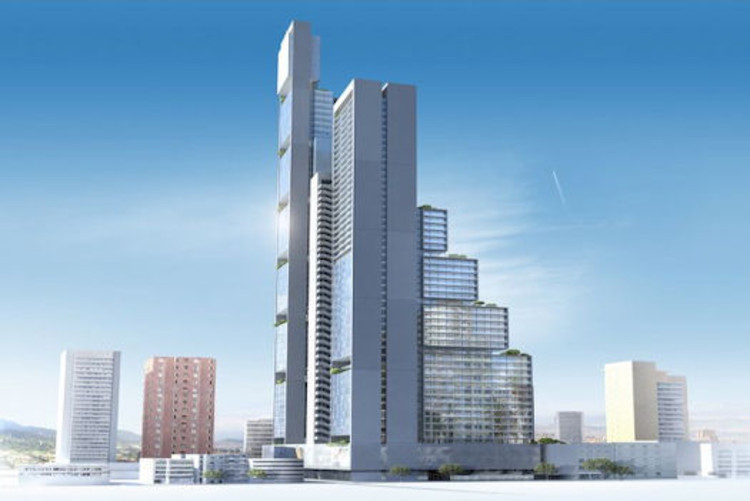 Although the terms ‘third world’ and ‘first world’ may still hold true in some aspects of Latin America, contemporary architecture and building developments in recent years have certainly elevated this region on par with the rest of the world.

2016 has been an exciting year for Latin American architecture. In April this year the Chilean architect Alejandro Aravena was awarded the most prestigious architecture accolade in the world, the Pritzker Prize. By August the major infrastructural developments and influx of buildings and facilities to accommodate the Summer Olympics finally came to fruition to serve an international entourage in Rio de Janeiro. In October the 2016 Rogelio Salmona Latin American Prize was awarded to the 2009 rehabilitation project of an old market place, Mercado 9 de Octubre in Cuenca, Ecuador, proving that sometimes enhancing what is already in place to better serve the community is more advantageous than building new from scratch. Apart from the awards received and buildings completed, this year also saw the inception of new projects and the implementation of new ideas that will make Latin American cities even more competitive and attractive in the future.

It was hard to label this a ‘best of’ list because the abundance of notable buildings completed this year made the selection that much more difficult. However, these five projects represent in my opinion the best quality, aesthetics and innovation, and represent significant milestones within their social and regional context.

The ever-expanding city of Bogotá had not seen a new skyscraper in nearly 30 years – that was until the BD Bacatá was completed, replacing the city’s iconic Colpatria Tower as Colombia’s new tallest building. This new addition is more of a skyscraper complex than a single building, with two separate but integrated towers occupying an entire city block for the purposes of apartments, shopping and hotel accommodations. The BD Bacatá is also significant for the rest of Latin America and the world. It stands briefly as the second tallest building in Latin America, and is the world’s first crowdfunded skyscraper. Its construction was financed on a model of selling fractions of the building to the local population or to private investors as oppose to relying on the funds and support of the government, big banks or corporations. “The first skyscraper built by famous common people,” was the slogan throughout Colombian billboards, radio waves and television advertisements in the advent of the BD Bacatá’s completion.

Latin America has a history of producing strong native architects, but in the recent years top internationally acclaimed and award-winning ‘starchitects’ have begun to cast their gaze toward Latin America. The renowned New York architect Richard Meier currently has projects underway in Mexico City and Bogotá, but his Latin America debut was completed this past summer in Rio de Janeiro with the Leblon Office. Meier’s debut represents a new push for the affluence of international designers, new sustainable building techniques, and a new variety of style and building material, proving that Latin American cities can compete with the aesthetics and technology of the world’s most advanced cities. The Leblon Office may not be Meier’s most outstanding project, a modest seven-story office on Rio’s busy Bartolomeu Mitre, but it has clearly expressed a new emerging phase of contemporary architectural aesthetics for the region. 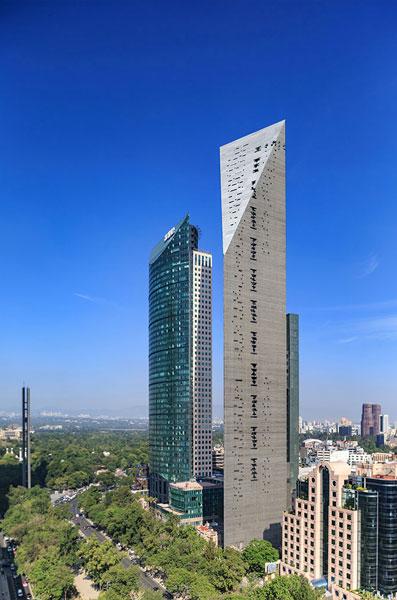 The Paseo de Reforma has long been a vital artery running across the heart of the immense metropolis that is Mexico City. This historic avenue, created during the French reign of Maximilian, was meant to compete with the Champs-Elysees in Paris or the Ringstrasse in Vienna. Now it is a central hub for pedestrians and monuments, businesses and financial institutions, and has become a competing playing field for architecture and vertical urbanism. The Mexican architect L. Benjamín Romano has now added a multi-functional 246-meter skyscraper that, for the time being, will hold the place of Mexico’s tallest building (soon be surpassed by the new Torre KOI skyscraper expected to be completed later in 2017). This corporate skyscraper also holds a Platinum LEED Certificate (Leadership in Energy and Environmental Design) from the US Green Building Council for a list of sustainable reasons, including its use of local and recyclable construction materials and innovative technology for reduced water consumption and energy costs. This represents a remarkable feat for such a vast area of vertical space and one that will make it more appealing to investors and corporate clients.

The young, creative South American couple, Mauricio Pezo and Sofia von Ellrichshausen, have become distinguished in recent years for challenging the conventional standards of architecture by proposing different methods of living within simplistic designs. “We believe in invention but always within our own personal memory,” stated the architect-duo. Their 13th house design, the Nida House, is a prime example. The Nida House was designed like a non-directional, inverted pyramid so that the five stories of living space expand with the elevation. The house is constructed out of native wood and dark concrete and enclosed on all sides by large movable glass panels. In this manner each floor can function as a balcony offering views of the wooded hillside where the house overlooks the small surfing village of Mantazas outside the city of Navidad.

In November the RIBA (Royal Institute of British Architects) awarded the University Campus the 2016 International Prize, calling it a “Modern Day Machu Picchu.” It was the seaside cliffs defining the boundary between the city of Lima and the Pacific Ocean that provided the main inspiration for this project. “The UTEC campus is conceived as a ‘new cliff’ continuing the sea edge,” explained the architects. The northern facade facing the city acts like “a ‘cliff’ or ‘shoulder’ to the outer world” while the southern façade cascades with hanging gardens over the vast Pacific Ocean. This new campus addition by the Irish firm Grafton Architects has recently transformed the 50-year-old engineering university UTEC (Universidad de Ingenieria y Tecnologia) into a state-of-the-art educational facility and sustainable work environment for the next generation of Peruvian engineers and designers.