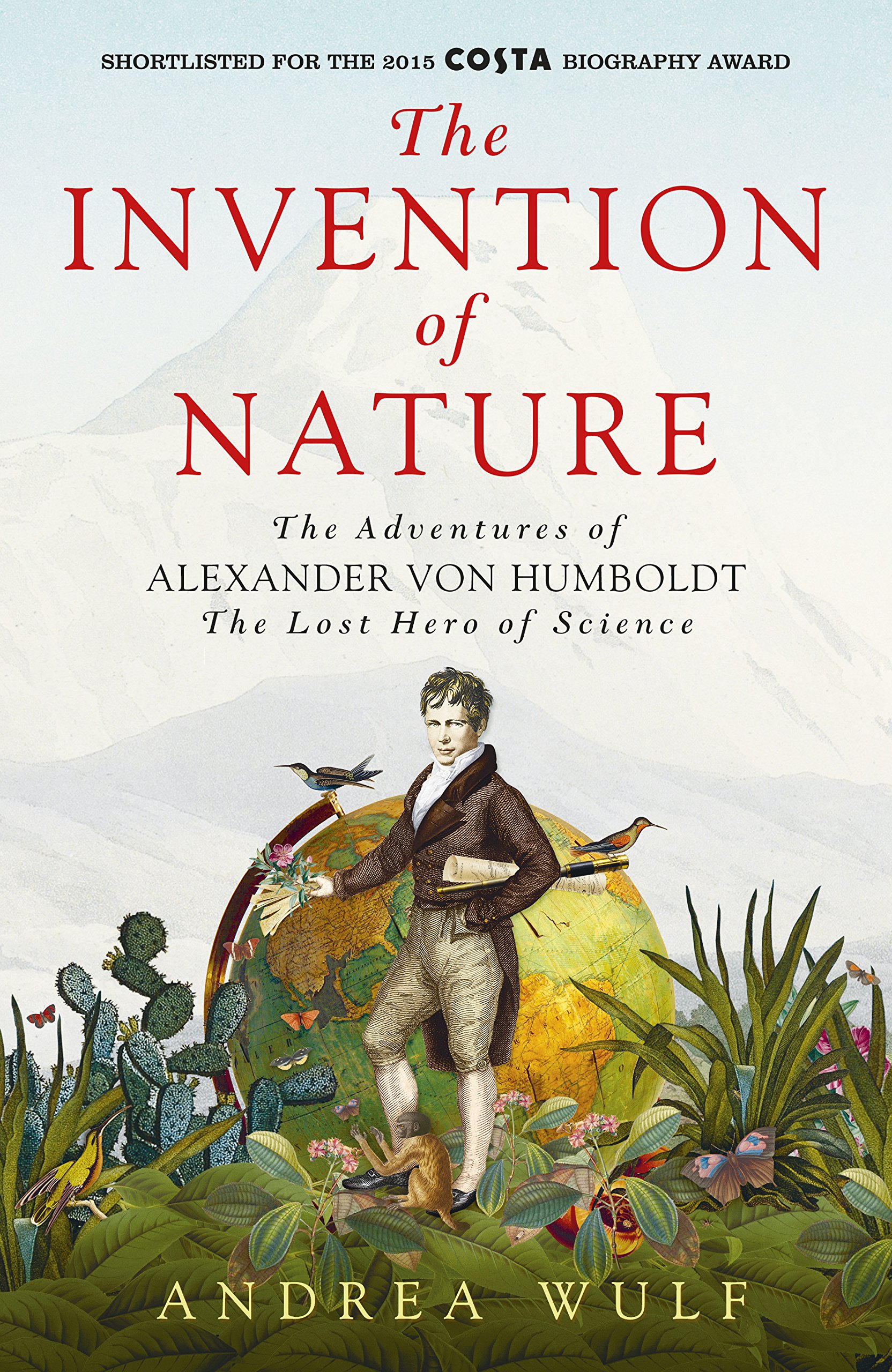 The Invention of Nature by Andrea Wulf

With The Invention of Nature (subtitled The Adventures of Alexander von Humboldt, the Lost Hero of Science) Andrea Wulf makes a persuasive case that Alexander von Humboldt’s contributions are foundational to modern scientific and environmentalist thought and should be more widely recognized. In the Anglophonic world, at least, Humboldt has been largely forgotten despite being one of the most famous men in the world during the first half of the nineteenth century. More subtly (but still apparent in the subtitle), Wulf also notes the tremendous influence Humboldt’s travels in South America had on his thinking and details his friendship with Simón Bolívar.

Alexander von Humboldt was born in Berlin in 1769 and spent a comfortable childhood in rural Prussia, where he loved to ramble about the family home, Schloss Tegel. His father died young, and Alexander and his brother, Wilhelm, were raised by a demanding, emotionally-distant mother. Both sons showed above-average intelligence, but their mother was determined they should find stable civil-service employment. Upon reaching adulthood, Alexander put his love of geology to work as a mining engineer. Given his great intelligence and capacities for learning and hard work, he excelled. He also showed his social conscience in his sympathy for miners and travelled prodigiously throughout Prussia and other German states. (As Wulf makes clear, Humboldt never lost his social conscience or love of travel.) Remarkably, he also found time to dabble in scientific experimentation unrelated to his work and became a close friend of Johann Wolfgang von Goethe (the titular character of Faust, Wulf suggests, resembles Humboldt in his unquenchable thirst for knowledge). But when his mother died in 1796, the obligation to remain a civil servant vanished, and he sought to make his dream of undertaking a great scientific expedition far from his homeland come true.

Support for such a venture proved hard to find, however, due to the political instability unleashed by the French Revolution. Great Britain and Denmark both refused to let Humboldt travel to their tropical colonies, and more disappointingly, France would not give him its support. In Paris, though, he found a cosmopolitan intellectual community that would be his home for many years later in life and met Aimé Bonpland, a talented botanist who was also game for a great adventure. Somewhat surprisingly, though, King Carlos IV allowed Humboldt passage to South America, an unusual stroke of good fortune given that the Spanish Empire was not known for great openness to foreigners.

After a stop in the Canary Islands and a climb up Tenerife’s Pico del Teide volcano, Humboldt, aboard a ship called the Pizarro (!), arrived in South America, on the coast of what is now Venezuela. Humboldt was dazzled by the tropical plants and animals, the distant mountains, and the clear, blue sky. He was horrified, though, by his encounters with slavery and the environmental devastation around Lake Valencia in the Aragua Valley. Humboldt observed that the destruction of nearby forests had ruined the soil’s ability to hold moisture by exposing it to the sun and caused the lake to fill with soil washed from the hillsides. Here, Wulf claims, “Humboldt was the first to explain the fundamental functions of the forest for the ecosystem and climate.”

In Caracas, Humboldt and Bonpland heard rumours that a river called the Casiquiare linked the great river systems of the Orinoco and the Amazon. Here they sensed a way they might make their great scientific contribution by confirming these rumors – geographers to that point had never found such a link between two great rivers anywhere else in the world. Along with their mestizo servant, José de la Cruz, they set out for the great rainforest to the south. After a trip across the Llanos (the flat grasslands providing quite a contrast to the hilly, forested landscapes closer to the coast) which included a harrowing encounter with electric eels, they arrived in the jungle. Here they were to be disappointed. Local missionaries had long known that the Orinoco and the Amazon were connected. This was not to be the end of their South American explorations, however.

After a series of events brought the pair to Cartagena, they decided to travel overland to Bogotá to visit famed Spanish botanist José Celestino Mutis. From Bogotá they ventured to Quito, where they were drawn to the Andes, especially Chimborazo, a nearly 21,000-foot volcano that was then believed to be the highest mountain the world. Their arduous climb – they made it to a little over 1,000 feet from the top – inspired Humboldt’s first great masterwork, one that would set a template for practically everything else he ever produced. Somewhat ironically for a man who would later become a prolific writer of books, this masterwork was an annotated sketch, the Naturgemälde. It illustrated precisely the various vegetation zones he found on Chimborazo, from the tropical palms at the foot of the mountain, the oaks and shrubs of the more temperate higher elevations, and the lichens near the snow line. For Humboldt, Chimborazo represented nature in microcosm; it was a place that made the influence of climate on vegetation manifest. The volcano gave him a way of looking at nature as a great unity of interconnected parts. After travels in New Spain (now Mexico) and the still young United States, Humboldt and Bonpland returned to Europe.

At the great risk of giving The Invention of Nature and Humboldt himself short shrift, nothing had such a profound influence on him as his travels in South America, and most of the rest of his long life was spent in Paris and Berlin writing and lecturing. Writings such as Personal Narrative of a Journey to the Equinoctial Regions of the New Continent and Cosmos (both multi-volume works) inspired a devoted readership on both sides of the Atlantic. While it is probably not surprising that Charles Darwin was highly influenced by Humboldt’s writings, it may come as a surprise that Simón Bolívar was a fierce “Humboldtian.” The two became friends in Paris, and according to Bolívar, Humboldt’s writings awakened in South Americans a pride in their continent (moreover, in writings such as Political Essay on the Kingdom of New Spain, Humboldt was not afraid to criticize Spain’s colonial regime). Bolívar also found inspiration in the heights of Chimborazo, seeing a South America destined for greatness and (fleetingly, it turned out to be) a united Gran Colombia under his leadership covering the northwest of the continent. Humboldt, a lifelong democrat, was dismayed to see his old friend turn into a dictator.

Wulf’s inclusion of a chapter on Bolívar illustrates a unique characteristic of The Invention of Nature. I am used to biographies devoting attention to the figures that influence the thinking of their subjects, and at that, not spending that much space on them. That is not so here. In making the case for Humboldt’s lasting influence, Wulf not only includes a whole chapter on Bolívar but also ones on Charles Darwin, Henry David Thoreau, George Perkins Marsh (an American diplomat whose Man and Nature was a pioneering work in exploring the effects of man-made environmental degradation), Ernst Haeckel (a German scientist who coined the word “ecology”), and John Muir, a Scottish-American who was a foundational voice in the national park movement and perhaps the earliest person to be what we might think of as an ‘environmentalist’. These chapters are all generally interesting, although the degree of Humboldt’s influence ranges from very strong (Darwin and Haeckel) to somewhat weak (Muir).

The chapter on Haeckel is slightly troubling in that Wulf downplays his work on racial theory (before reading the book, I knew Haeckel as the guy who coined the word “ecology” as well as him being notoriously racist), arguing (in a footnote, not in the main text) that his views on race were comparable to other Europeans of his time, including Charles Darwin. This is not quite true: Haeckel wrote quite explicitly in favour of a view of human races having different biological origins with Europeans being superior; Darwin, although perhaps a little too timid and limited from a modern view, actually wrote against this view in The Descent of Man. Less seriously, I am not totally convinced by her attempts to sidestep the rumours of his homosexuality. Even as Humboldt is presented in this book written by a skeptic on the subject — Wulf basically claims he was asexual — it seems hard not to conclude that he was gay. But of course, there likely can be no conclusive evidence of his sexuality, and it has little bearing on his stature as important figure in modern scientific and environmentalist thinking. And his thought was shaped in large part by his experiences in South America, especially on the slopes of Chimborazo.

Andrea Wulf’s The Invention of Nature: The Adventures of Alexander von Humboldt, the Lost Hero of Science is available from Amazon UK and Amazon US