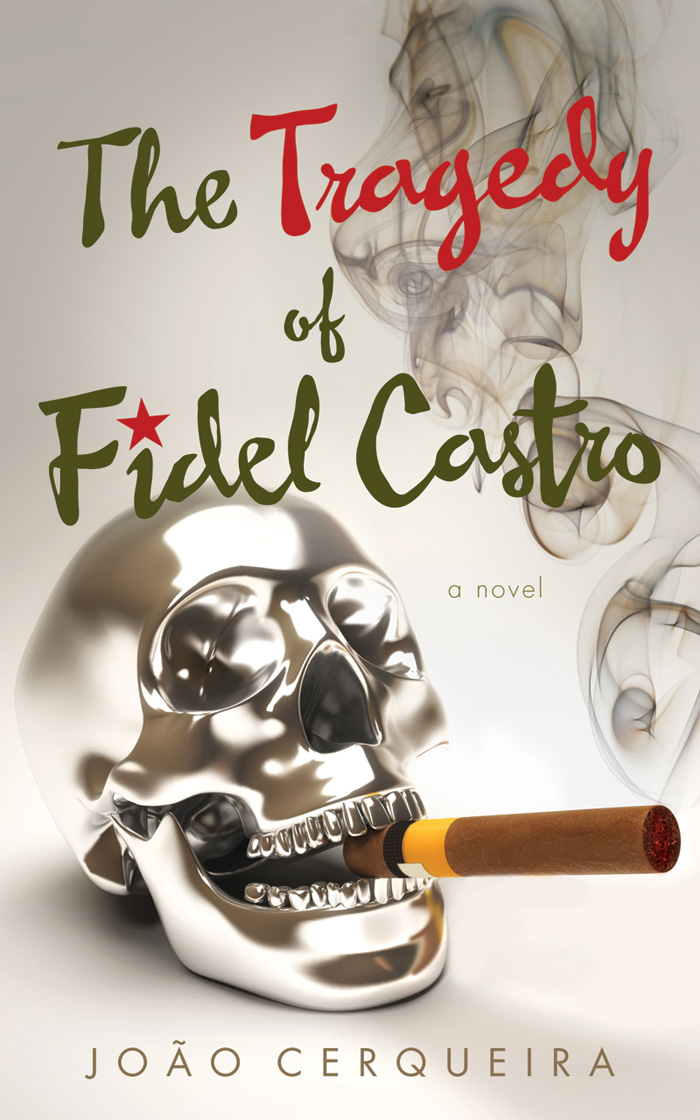 The Tragedy of Fidel Castro

João Cerqueira’s The Tragedy of Fidel Castro is an amusing satire and parody on what happens when political fact meets political fable and turns surreal out of sheer exasperation. In a mere 168 pages, the reader stares through the eye of the sacrificial chicken in a Santería service at the inevitable consequences and ambivalence of the human condition.

“Ogum, the lord of war for some, bronzed St Anthony for others, detected the wisp of reverberations coming from El Comandante (Fidel Castro) and did not much appreciate what he heard.” Cuba, for all its dialectical materialism and its Marxist historicity, hasn’t managed to make either Santería or Catholicism genuflect.

Free will and testaments

What if God had sent Jesus down for a second-coming in the midst of a post-Bay of Pigs US-Cuban standoff? What would have happened? It’s temping to say nothing. Surely, it would have played out just as it did. After all, having doled out free will, you can hardly take it back. In a supposed socialist utopia, there isn’t any; and in a capitalist paradise, you’d need a very expensive lawyer to sue God for redress.

Meanwhile, JFK’s generals argue. “A Bay of Pigs invasion movie with Clint Eastwood would produce a much different result.”

“No, the right guy would be Sylvester Stallone…” Then one of the generals says: “Let’s get serious, now. Where are the whores?” J Edgar Hoover, meanwhile, can’t help noticing that what separates the generals from the GIs is merely position and power.

God and Jesus witness the growing feud between JFK and El Comandante with alarm. God feels it would be appropriate to intervene. Jesus disagrees. “If we don’t do anything, something terrible will happen. Or even worse, they’ll say it was our fault.” God says to Jesus at one point: “What do they believe in?”

“Oh, they believe in power, money, in the good life, wild parties, things like that,” he says . Wearying of his only begotten son, God says: “They’re your kids, son!”

What happens when the immovable foreign policy meets an irresistible force bent on the immortality of martyrdom?

Cerquiera conjures up this prospectus with some of the major players of the time. There’s JFK; El Comandante; J Edgar Hoover; Fátima (a sort of earthbound PA to the One in substance with the Father – a la Nicene Creed – and sometime Marian-style solar eclipse therapist); a Cuban spy-turned traitor called Varadero (named after the capitalist-only tourist enclave in the north of a certain workers’ paradise); a presidential counsellor (given to sloganising – “Yes, we can!”); the devil (incarnate); a monk called Athanasius (he of the Arian v Orthodox schism and the Council of Nicea fame); Camilo Ochoa (a revoluntionary fall guy – a composite of Camilo Cienfuegos, who died in a mysterious plane crash and General Arnaldo Ochoa, a hero of the revolution, Angola and Ethiopia, who became scapegoats for a revolutionary failure). All the raisons d’être are up for a bashing here. It is difficult to escape from the feeling that this is limbo, where the same lines are drawn over and over again whilst reality, reason and right recede into the distance like matter after the Big Bang.

This is a world where the thoughts of Kafka, Voltaire and Orwell are fused into a solid state – frozen against any attempt to free them: a government by the people for the people which is run for and by lobbyists, bureaucrats and corporations simmering in doublespeak and meaningless slogans; a revolution, which since its inception, is slowly almost imperceptibly returned to its starting point despite the absurd Panglossian rhetoric of its dictator, whose nose, far from falling off, grows longer by the day; then, there is the pathetic derogation of human agency which invokes or derides super-naturalism by turns yet seems forever reluctant to inspect it own fickle ambivalence or take any responsibility.

All roads lead to hypocrisy

The essential theme of the piece is the laborious and never-ending tango between the US and Cuba. It is a dance marathon where neither side can afford to let the other lead and where the desire not to lose face keeps the parties from collapsing under the weight of their own hubris.

At a disco, Varadero spies a vision across the dance floor. No, it’s not the Archbishop of Montevideo, it’s El Comandante, so popular he has to resort to disguise to go out in his own country. Still, from this particular encounter, El Comandante, learns the importance of electronic music to a six-hour speech on the merits of inertia.
The character of Varadero epitomises the duality: emotionally attached to the memory of the revolution and adamant that he’d do it again, yet sold on the attractions of the capitalist nemesis. In an early scene, JFK lets him go, saying: “Human beings are the product of their circumstances.” He’s waved off aboard a contraband boat which supplies the Cuban elite with barrels of bourbon, TVs, perfume and Statue of Liberty miniatures. Similarly, on the US side, embargo withstanding, no-one can forego the delights of a Cohiba XXI cigar. At one point, back in Cuba, a shambling disorientated Varadero is protected by stray dogs who flock around him like a “just society”, where for others, more important, they’d be a “praetorian guard”.

The paradox is that as hard as the US has tried, all its actions against Cuba have merely enshrined El Comandante’s dictatorship as a plucky upstart against Yanqui imperial power. Although not without its successes (in education and health care) Cuba is a shambling museum piece to the failure of its own project. It’s a revolutionary synthesis which is working its way back through antithesis to thesis. As Cerquiera notes: “They, with mouths open, partook endlessly of the revolutionary host offered by the high priest despite waves of nausea.”

Where is the leaning tower of Pisa?

Cerquiera does a fine job in lashing out in all directions and has an unerring eye for the target. Whether it is the symmetrical irrationality of the Putista/Whore and the Padristas/Priests (which has shades of Swift and Henry Fielding) or in the self-serving neo-Stalinist rhetoric which issues from the sons of the revolution or El Comandante: “…one shot is worth a thousand words…”, “I have the feeling that only the bristle of bayonets will work here” or “A government replacing the heavy hand of scientific socialism with the dialogue of bourgeois democracy invites the executioner to his own beheading, placing the axe in his hand”.

There’s also the Old Testament tale of moral murkiness involving David, Uriah and Bathsheba and a reworking of the doves-and-hawks scenario in a lunatic asylum run by monks in which the abbot faces a coup and the lunatics implore El Comandante to lead them.

With the last battle JFK and El Comandante come face to face in a duel. It’s winner takes martyrdom or hope. JFK guarantees free passage to the Cuban soldiers. JFK wins out more by hope than divine judgement. Indeed, Fátima – who’s scheduled to put on a solar eclipse to bring the parties to their senses – arrives late for her meeting with Jesus (who’s now accompanied by Varadero) because she wants to find out what happens in Bésame Mucho/Kiss Me Lots, the last episode of a romantic Mexican soap opera. When the eclipse finally happens, it’s comes as more of a validation than a warning.

It’s a true romp of a piece in a hall of mirrors.

The Tragedy of Fidel Castro, by João Cerqueira, translated by Catherine Bennett and Chris Mingay, is published by River Grove Books. It’s available to buy from Amazon